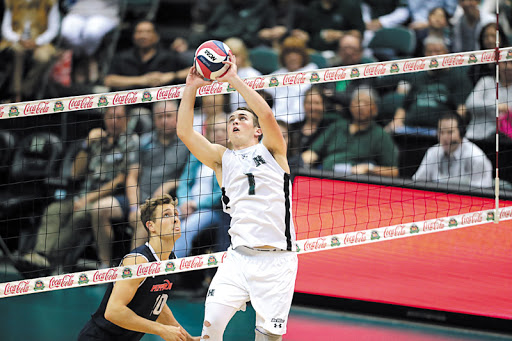 So what professional volleyball player takes the time to reach out to the NJ Volleyball community during these extraordinary times? Joe Worsley does!!!

He just returned from Germany to his home in California and his first season with VfB Friedrichshafen in the German Bundesliga. After a truly amazing career at Hawaii where he distinguished himself as the Nation’s best setter, he joined VfB in Germany for his first professional season. Before the season was halted, VfB was 14-6 in second place. We reached out to him to discuss his current situation and he wanted to send all of the NJ players a message…

Joe clearly wants to make a difference for volleyball players all over the world. His passion for the game is evident and his speed to respond truly shows his caring and warmth to junior players nationwide.

A little about Joe… his Dad introduced him to volleyball for the first time when he was seven and he made it clear that “there is nothing else for me.” He won 2 Junior National Championships twice before turning 18. He then attended the University in Hawaii. “That was the best decision of my life,” he says. “I had the best years here and playing in Hawaii is just something special.” It’s an amazing place with up to 10,000 fans attended the home games of the “Rainbow Warriors”. Last season they set a new university record winning 28 out of 31 games played before losing in the National Championship game to Long Beach. Worsley also finished with the Lloy Ball Award honoring the best setter in the Nation.

We will be rooting for you Joe…

2019 (Senior): Named to the AVCA All-America first team…NCAA Championship all-tournament team…all-Big West first team…Off the Block Lloy Ball Award winner as the nation’s best setter…OTB National Setter of the Week (Jan. 14, March 4 & 18, April 8)…Big West Player of the Week (March 25)…finished his career ranked eighth all-time in assists (2,729)…led the nation in assists (11.22 avg.)…appeared and started in all 31 matches…quarterbacked the UH offense to a nation’s best .435 hitting percentage, which broke the NCAA’s all-time mark in a single-match and in the 25-point scoring era…also averaged 0.74 kills and 1.72 digs per set with 28 service aces…matched career-high of 59 assists in Big West Tournament championship match vs. Long Beach State (April 20)…Most Outstanding Player of the Hawaiian Airlines Rainbow Warrior Classic for the second straight year…also named to the all-tournament team of the Outrigger Resorts Invitational…career-high seven kills with no errors in nine attempts (.778) in win over Concordia-Irvine (March 26)…career-high five aces in season-opener against NJIT (Jan. 10)…directed UH offense to .600 or better in three matches, including season-best .667 vs. Lincoln Memorial (Feb. 15), which is the second highest in a three-set match in the rally-scoring era…started 72 of 118 career matches…..named academic all-Big West.
2019 Match-by-Match Statistics

2018 (Junior): Named to AVCA All-America second team and all-Big West first team…ranked No. 2 nationally in assists per set (11.02)…also finished seventh in the Big West in digs per set (1.82)…directed UH offense to .340 hitting percentage, which ranked No. 4 nationally…selected as Most Outstanding Player of the Texaco Rainbow Warrior Classic and Waikiki Beachcomber by Outrigger Classic…also named to the all-tournament team at the Grow the Game Challenge and Outrigger Resorts Invitational…averaged 0.49 blocks per set…had 10 service aces…hit .398 with an average of 0.62 kills per set…started all 27 matches at setter…posted six double-doubles…topped 50 assists on three occasions including a season-high 54 in a five-set loss to Long Beach State (April 13)…career-high 14 digs in win over UCLA (Jan. 26) which earned him Big West Defensive Player of the Week honors…selected as VolleyMob’s National Player of the Week (April 17) after helping UH split a two-match series with top-ranked Long Beach State…career-high four service aces in win over UC Irvine (Feb. 23)…named academic all-Big West.
2018 Match-by-Match Statistics

2017 (Sophomore): Appeared in all 33 matches, making three starts at setter…used primarily as a serving specialist and tallied nine aces on the season…averaged 2.09 assists and 0.46 digs per set…started both matches against Grand View with 28 assists in the opener (Jan. 27) and a double-double of 30 assists and 10 digs, along with a season-high two aces in the rematch (Jan. 29)…season-high 31 assists and two blocks in another start versus Lindenwood (Feb. 15)…also saw significant action at setter in the season-opener against Erskine (Jan. 5) with 22 assists and five digs…season-high three blocks against USC (March 3).
2017 Match-by-Match Statistics