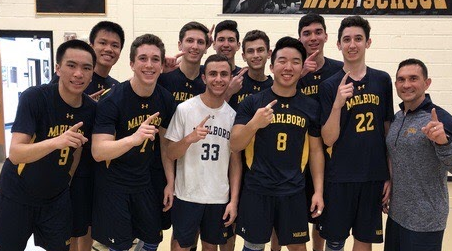 Logan Toran was a top 20 player on the attack last season for players returning in 2020. He smashed 174 kills as a junior and was projected to put up over 250 this season prior to the season being delayed. You can feel the confidence from Logan and other Marlboro players that we have spoken to over the past few months as the feel strongly this can be a breakout year for the squad.

Logan exhibited tremendous all around play by adding 164 digs, 13 blocks and seven aces. When you combine Logan’s high level play with sophomore Nick Brzoska (one of the top 2022 class players in NJ), returning senior Steve Shanin in the middle, and junior Dan Marino who was so impressive during the club season on Warren Six Pack 17-2, you have a starting squad that can compete with just about any team in NJ.

Logan will be attending the University of Pittsburgh in the Fall and will have a full load as he pursues his engineering degree. Like many New Jersey players, he may opt to continue playing for the club team at Pitt rather than committing to a D1 or D3 regiment on the volleyball court. You can never argue with Academics being the main focus.

With a possible season extension to June 30 from the NJSIAA, it is quite possible that we may end up getting a solid 5 or 6 week season of volleyball. We know from Logan’s perspective, it would be an amazing opportunity to squeeze in a senior season and showcase the Mustangs talents.

Here is our interview with Logan…

My name is Logan Toran. I live in Marlboro and play volleyball for Marlboro High Shcool. I will be graduating in 2020. I come from a sports family and am the youngest of 3 brothers.

I have been playing volleyball for 4 years. I was always interested in volleyball and had played on beaches and with friends but never anything competitively. Freshmen year my brother told me he thought I should try out for the volleyball team, and I agreed with having no intention of actually showing up. My brother had a feeling I wasn’t going to, so he forced me to talk to the coach, making sure he knew who I was that I would show up.

I am 6 feet. I have 28 and a half-inch vertical. I was originally a Libero and then got moved to outside hitter which is definitely my favorite position. I used to play Club volleyball for the Garden State Attack Volleyball team until they disbanded.

How are you dealing with current world situation with COVID-19?

From a social aspect, its been pretty difficult for me, not being able to see any of my friends or anybody that I play with. However, I feel it can be a great time for self-improvement, both physically and mentally. I’m trying to stay as fit as possible and making the best of what I have.

Absolutely. Of course, people’s health comes first so I agree with the move to the summer, and it would definitely be upsetting for people like me who are in their senior year to have their last year of volleyball completely taken away.

I’m really looking forward to this season. I believe our team has what it takes to do big things this year. We lost 3 very important players from last year but we have a lot of returning players who have been putting in hard work in the offseason so I’m very excited to see this season play out. I’m also looking forward to playing with Sophomore Nicholas Brzoska. He’s a fantastic player and an even better person. I’ve always believed that having great communication is crucial to being part of a winning team and many of us have been together for so long that it is like second nature to us. I believe our close team bond is Marlboro’s key to success.

That would have to be Ryan Betz from Wall. He’s a great hitter and a really good friend of mine. I played club with him for a while and he’s only getting better every time I play him. Competing against someone who you play with year-round and knows how you think is definitely pretty challenging.

Coach Keith Masi is one of my biggest inspirations and favorite parts about the High School Season. He has seen me develop as a player for four years and is responsible for much of my change on and off the court. He is also very into fitness outside of volleyball which I definitely model my self after to help me stay in shape all year round.

I would have to say CBA and Colts Neck. We always have insanely competitive games and I look forward to them all year.

That would have to be the time when I dove face-first into a metal chair on the sideline in an attempt to save the play. I happened to save it, which made the headache worth it.

What do you do during the offseason to stay in shape and prepare for next year? (Club team?Workouts? Watch VB vids? Go to College games?) Do you play other sports? (if so, which ones?)

In the offseason, I love to stay fit as working out and lifting are some of my hobbies. It definitely helps when I get back to the High School season as I’m in a constant state of progression. I do love to watch volleyball videos to stay on my game during the offseason. During the summer I really love to play Spikeball and beach volleyball. Spikeball really keeps my hand-eye coordination up and I think directly translates to volleyball skills. Also living by the shore is great because I can play beach volleyball all summer.

I’d love to say I don’t have any biases, but if I had to choose a favorite teammate it would be Steven Shanin. He’s a great player and I have been playing with him every year since freshman year. Watching his progression has been incredible. Also, over the four years, we’ve developed a strong bond and he’s become one of my closest friends. 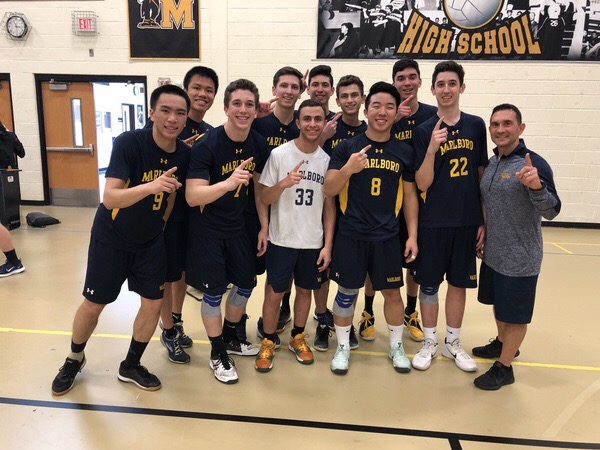