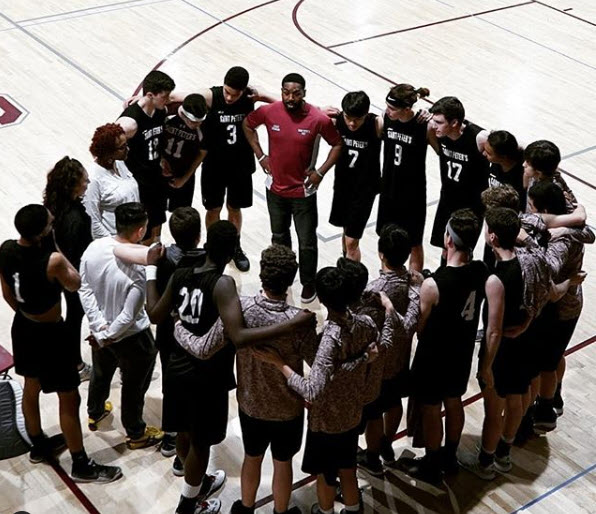 St. Peter’s Prep and Coach Greg Steward created one of the feel good stories from the 2019 season. A former student and player stepping in for long-time Coach Maurice Washington as a last minute replacement in what most predicted as an apparent rebuilding year. But Steward ended up leading the Marauders to a 19-5 record, a Hudson County Championship, a Sectional Final match-up with Ridge that could have gone either way, and a #6 overall ranking in the State. A great success story that was a bit under the radar. We gave Coach Greg the NJP Coach of the Year award for the North 2 Sectional in his first year.

The Marauders are expected to again be a top 10 team in NJ. They are powered by 6’3″ senior Outside Chris Larkin, and a solid junior class with 6’5″ Outside Aidan Apito, 6’4″ Middle Ryan Karbowniczak, 6’3″ Middle Pius Mwemba, and an outstanding setter Tim Jimenez. Seniors Adrian Dookie and Luke Morrison will also be players to watch.

Coach Greg’s style seemed to be a perfect match to keep this squad motivated last season. Steward has high expectations for this season based on the teams talent level. Larkin is one of the best players in the state and has been a top performer on the Warren Six Pack 18-1 club team which is an elite squad at the top of the apex. Apito and Karbowniczak played up on the Side Out Sports 18-1 squad as juniors. Plus a multitude of talented players including seniors and also underclassman coming up through the ranks. The team will be a strong candidate to get to their sectional this year and in years to come with Coach Greg setting the strategy and leading the way.

This is our interview with Coach Greg Steward…

Tell us a bit about yourself? (What college did you attend, family?, former high school and club team?, experience, etc…)

I attended Ramapo College. Married with 1 daughter. I attended St. Peter’s Prep. Did not play for a recognized club team, but was a part of LPVJC which is a grass roots team in Jersey City, NJ which played in tournaments all over the US and Canada.

What motivated you to become a high school volleyball coach?

Maurice Washington former NJCU alumni and St. Peter’s Prep coach asked me to join the staff for a few years.  Obligations didn’t line up because of my work schedule.  Finally in 2016 it did, and haven’t looked back since.

What do expect will happen to the Spring season due to the COVID-19 situation? Are you open to the idea of playing a summer schedule if needed?

First and foremost the safety of everyone is the priority.  Provided that happens, I expect that we will play into the summer.  In fact, I am counting on it.  I really want to give the seniors an opportunity to showcase what they’ve worked four years to hone.

NJP expects SPP to be a top 10 team as well as the best in Hudson County. Which teams will be your biggest competitors in county and in the state?

Honestly, everyone is our biggest competitor.   In Hudson County, I really like the team that Kearny has put together.  North II Livingston is always tough and well coached.  Of course, you have your perennial ranking toppers (Fair Lawn, Southern, St. Joe’s, and BR)  They are all on my radar.

My motto is pretty much the same.  We can’t worry about tomorrow.  Cherish each day and take care of business today.  If you do that, the future will take care of itself.  Advice changes from year to year depending on personnel, and I was really excited to implement some new offensive schemes.  Hopefully, I still have the opportunity to do that.

Tell us about your team this year? Who will be your top players?

We have a really solid team.  The core group were sophomores last year and I got a lot of quality experience playing in tough matches, so I expected them to be very successful.

I play against the kids in practice and challenge our schemes and philosophy.

This year we had the most parity I’ve seen in awhile. In the few days we had, I split the teams up and the games were competitive and close.  The players can tell you I do not yell too much, I rather the player figure out the problem themselves, and coach one another.  You only truly understand, when you can teach someone else.

Video Games, and dancing.  I used to be in a dance crew in highschool.  I can’t keep up with the kids anymore but I have a solid two step.

What is the biggest challenge that you have as a high school volleyball coach?

For me I would love to play best of 5.  I try to train my kids so they can play on the next level, and that’s what they do there.  I think it is something NJ should change.   Also I wish the season was extended.  Some kids are late bloomers, and really start to pick it up toward that third month, by that time we are gearing up for playoffs, it’s tough to make huge changes.

Winning the Counties first year as Head Coach.  People had doubts about our team and we rose above it.  Those guys played their hearts out and made me so proud.   Also we didn’t play our best game and we were right there in the Sectional Final.

How would you describe your coaching style?

Practices are loose, and the drills build upon themselves.  I think playing scrimmages are the best tool, I love live action.

Are there any rule changes that you would to see in NJ High School Volleyball?

What makes you different than other coaches in your division?

Maybe that I can still play at High Level.

How do you determine playing time on your team?

Simply, what works.  Last year I ran a 6-2 because it worked.  I planned to change it this year.  Playing is based on personnel, and what gives us maximum output and efficiency.

What advice do you have for parents of players on high school teams?

Learn your child’s sport.  Be engaged about what happens on the court.  It means a lot to them.

Don Guide – He taught me the game, and not just how to play but to think it.

Maurice Washington – No one prepared for each game the way he did.