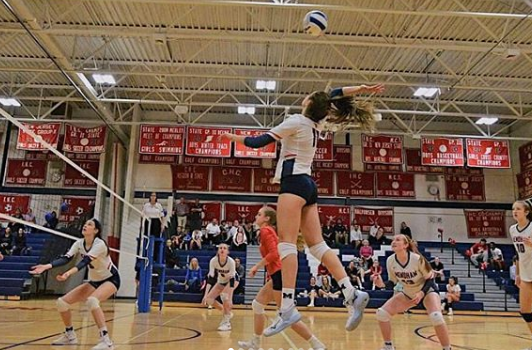 This past Friday, July 31, Cat Holtz of the Mendham volleyball team had announced her commitment to play volleyball at the collegiate level at Gettysburg College at the conclusion of her Senior year at Mendham High School.

“I picked Gettysburg College because I could really picture myself there for the next four years,” Holtz said, “I had looked at a few other schools but when I visited Gettysburg, I immediately felt like this is the place I am supposed to be.”

Catherine (Cat) will be joining fellow Garden State Elite Volleyball Club 17 Premier teammate Brooke Askin at Gettysburg for the 2021 season. Askin is a hitter for Pope John in the NJAC.

“I could not be happier! Brooke is an amazing player, teammate, and athlete; I’m so excited to continue playing with her,” Cat added.

Holtz mentioned that she is extremely excited to have the opportunity to continue playing the sport she loves at the school that she knows is the best fit.

This past December, Cat Holtz first got noticed by Gettysburg at a recruiting combine—the rest was history.

“We had been talking ever since and I would keep them updated with my club tournament schedule, new film, and exciting things I had going on relating to volleyball,” the Mendham Senior said.

Cat also has some advice for anyone who is looking to play volleyball in college.

“Don’t be afraid to put yourself out there! I used to look up the list of college coaches attending big club tournaments and email every single one of them that I had even a remote interest in,” Holtz continued, “I emailed schools from Bentley University in MA to Penn State University in PA, and just hoped for a response. I got a lot of rejection emails, like A LOT, but I would also get some positive emails back and that made it worth it!”