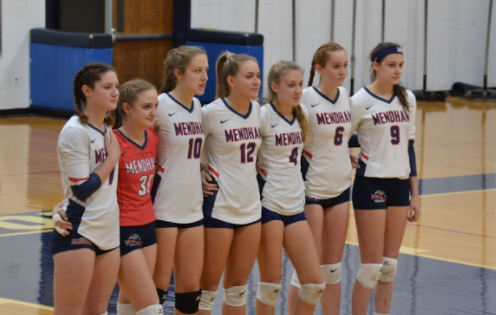 Travel and exposure to multiple cultures can certainly mature a person. When you speak with Poppy Skjonnemand, a junior volleyball player at West Morris Mendham high school, it gives you the feeling you are talking with a post college professional rather than a high school student. Poppy and her family have settled in New Jersey after extended stints in Europe and Asia. This maturity is a strong characteristic of leadership that is sure to benefit an already immensely talented Mendham squad that made it to the State Tournament of Champions Finals last season.

It’s easy to get overlooked on a team that has multiple talents of some of the best players in NJ high school girls volleyball. With University of South Carolina beach volleyball commit Lauren Wilcock leading the state in kills, her sister Sarah emerging as another volleyball superstar in the family, and Gettysburg commit Cat Holtz all around play, Poppy’s considerable contributions as a sophomore appear to pale in comparison. But if she were on another high school team’s roster, she would be considered superstar status. And it will certainly evolve to that for her senior season next year.

Poppy is motivated, passionate, and seasoned. She explodes on the ball at middle and puts her kills down with force. Her size provides a powerful presence on the front line. She is a formidable blocker and has excellent instincts to find the direction of opponents attacks.

She also has the intangibles that coaches look for on the floor. A positive attitude, strong determination, and an energy level that can be felt in the crowd. Her club season at Xtreme 17-National will have her well prepared for the Spring season delayed start on what could be a magical season for Mendham.

Here is our interview with Ms. Skjonnemand…

Tell us a bit about yourself, Poppy?

My name is Poppy Skjonnemand and I attend West Morris Mendham High school, located in Mendham NJ. I live in Far Hills with my Mum, Dad, older brother Billy and younger sister Maia and of course my 3 cats, dog and chinchilla. I have started on the Mendham varsity volleyball  team since my sophomore year and I will be graduating in the year 2022.

I started playing volleyball as a Freshman in high school.  Athletics has always been a part of my life, growing up in England, Taiwan, Japan, and now America, I was always participating in any athletic activity. I started gymnastics at the age of 6, followed by soccer at the age of 8 and participated in many other sports such as track, basketball and softball and continued up until my freshman year. I knew nothing about volleyball, however, I fell in love with the sport after doing a camp at xtreme volleyball academy and knew I wanted to pursue it further. My sophomore year, I made the varsity team just after one year of playing club volleyball at Xtreme and became a starting Middle Hitter where we won our Group 3 State title.

I currently have a vertical of 27.1 with an approach jump of 10′. I play for Xtreme Volleyball Academy in Ledgewood. As far as position, this is a tough question because I would happily play any position on the court. I play all over the front row and I consider myself lucky that I have an opportunity to play any position. For my school season, I was primarily a Middle Hitter, however, for club season, I was all over the front row and recently I have been given an opportunity to play back row as a middle. Any opportunity I get, I am in the weightroom working to increase my vertical.

Tell us about your Mendham teammates. Who do you expect will be this year’s standout and up and coming players?

I am truly lucky to be surrounded by such an amazing group of people who not only support but encourage one another to be their best self. Last year at the beginning of our season, I was the only sophomore on the team and I was so amazed at how nice the girls were and every single one of them took me under their wing and taught me so much as a player and person. Our players returning to varsity are: Lauren and Sara Wilcock, Cat Holtz, Michelle Kifyak,  Ally Blackwell, Gabriella David, Ania Trzesniowski and Elizabeth Campos. We are expecting players from jv to be moved up, in addition, we have a transfer from Newark academy high school, Anibelle Ernst, who is a 6’ft Middle hitter, who we are hoping will make a great transition into our starting lineup.

Mendham has possibly the best starting six of any team in New Jersey with Lauren and Sarah Wilcock, Cat Holtz, Michelle Kifyak and of course yourself. What is your expectations of this year’s team?

This season we are looking pretty strong and I believe that we can have another successful year for the Mendham minutewomen. Coming from last season where we had a very successful season, winning states, county, and sectional, we are hoping we can defend our title as state champions.

NJP considers you as one of the top players in the state. Do you plan to play volleyball at the college level, and if so, which ones are you looking at?

I do plan on playing volleyball at the college level. Right now I am not committed, however, I do plan on continuing  being a student athlete.

Mendham had an amazing run to the State Championship game last season. Tell us about your experience?

It was honestly such an amazing experience and I find myself so lucky to be able to share this experience with my teammates! At the beginning of our season, like many teams, we weren’t truly connecting, however, we gained such a strong bond together which I believe was the key to our success. For our team, we just kept climbing and climbing the ladder till we found ourselves at the top, and I still can’t believe we got to the point we did. I am beyond proud.

Tell us about your club experience at Xtreme.

I can not tell you how thankful I am for Xtreme and all they have done for me. All of the coaches at Xtreme are there to help you thrive and to truly help you be the best version of you. Xtreme has such an incredible environment where everyone is so supportive of one another and it truly feels like one big family.  I have played  at Xtreme for 3 years now, this current season is my third, and each year we have grown stronger as individuals but more significantly as a team. The girls are my family, and I love them all so much. My two main coaches who I have had for three years now, Coach Lynette and Jerry, both have helped me in so many ways and I will forever be grateful for all they have taught me. Coach Cindy and Coach Braulio, have also had a significant impact on the player that I am today.

As i touched on previously, I really believe that all of the coaching staff at Xtreme have helped me become the player that I am today. The environment at Xtreme is like none-other. Xtreme really sets their players up for success, not only as a player but also as a person. Coach Lynette,  Coach Cindy, Braulio, Coach Mark, Tina, Alilison Hayward, and so many more people have helped me beyond belief.

My support group consists of my Gan Gan, my family, and my incredible friends. Each and every one of them has helped me in some way or another and I love them all so much! Because my family lives in England, we rarely get to see each other and they were all watching our live games cheering us on from home.  I am so lucky to have such amazing people in my life.

My favorite volleyball story was during our spikefest tournament on the third and final day, we were in the gold bracket and we made it to the final game to decide who would win first place in the gold bracket. We were playing a team named CT Stars and we had played them the previous day and lost to them. Our team was so fired up and we wanted to win against them so badly and we fought and fought for every last point. We had won the first set, they won the second set and the third set we went to 32 points. We won the game by two points which meant we had won first place in the gold bracket. I have never been more proud of my team.

My favorite thing to listen to pre game is thunderstruck by ACDC, for me this song really gets me and my teammates ready and hungry to win. I can’t tell you how many times we listened to it during practice and warmups.