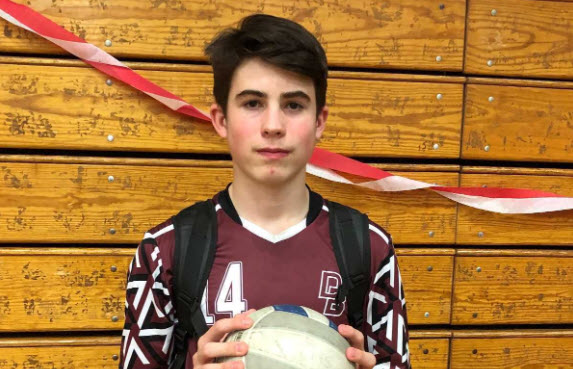 One of the up and coming high school volleyball players in New Jersey is CJ Barker from Don Bosco Prep. CJ had an awesome freshman campaign for the Ironmen putting up over 100 kills and 14 blocks in just a 16 match season. There were high expectations for a high powered sophomore campaign but that went by the wayside when COVID cancelled the high school season in March.

Now 6’2″, CJ has the size to go with the tools, and is expected to be a force in his junior year and beyond. He balances volleyball and basketball currently along with his academic schedule at DBP. He will be a nice fit for a club next season as he prepares for his senior year and the potential of playing after high school at the collegiate level.

Bosco has always been a bit of an unknown quantity in the Big North. Information flow is not a top priority for the school and athletes seek alternatives to get visibility from recruiting agents and college coaches. The Ironmen can always offer a big surprise and with CJ driving the attack, they could be a formidable presence for the upcoming spring campaign.

CJ has a ton of versatility. He is a force on the attack and has good instincts on the block. As an outside, he will be relied on to play both offensively and defensively on the back row. He will provide a solid core for the Ironmen to build around over these next two season.

Here is our interview with Barker…

Tell us a bit about yourself, CJ?

I am a junior at Don Bosco Prep.

Freshman year, me and a bunch of my friends decided to try out for the team because our theology teacher gave anyone on the team a bonus at the end of each marking period.

My height is 6’2, my vertical is 29 inches, I play outside, and I don’t play club. My favorite position to play is outside.

Tell us about your Ironmen teammates. Who do you expect will be this year’s standout and up and coming players?

This year if we have a season I think we will have two stand out performers. Peter Shahin, our setter who is a senior, is expected to have a big year and Timmy Ciriello our opposite in my eyes is one of our most underrated assests.

I would love to play in college if I got a scholarship. UCLA is my dream school and it would be awesome to play for them.

You averaged 3 kills per set as a freshman during an outstanding initial season for the Bosco. What are your personal goals for this season?

My personal goals for this season are a 300 kill season as well as a championship.

What is your expectation for this years Don Bosco squad?

I think we will be a hard team to play against. I don’t think anyone sees us coming.

Tell us about your high school Coach Harris Brkovic.

My high school coach is great. He is very active during practice always making sure we are focused. He also scrimmages against us with thr other coaches creating a great balance between work and fun.

I play basketball during the off-season, it is a great way for me to keep my conditioning up as well as my vertical.

Which player was the toughest competitor that you faced and why?

When I was a freshman we played against Bergen Catholics outside Dylan Anderson who committed to Pepperdine in California, I played well against them that game but he was a tough matchup.

My Mom and Dad are my support group they try to make it to every game.

My favorite story is my freshman year we played Bergen catholic at their place and I had a crucial block against there outside Dylan Anderson who committed to Pepperdine we got the ball back and ended up winning that set.

Basketball and I play football with my friends a lot.