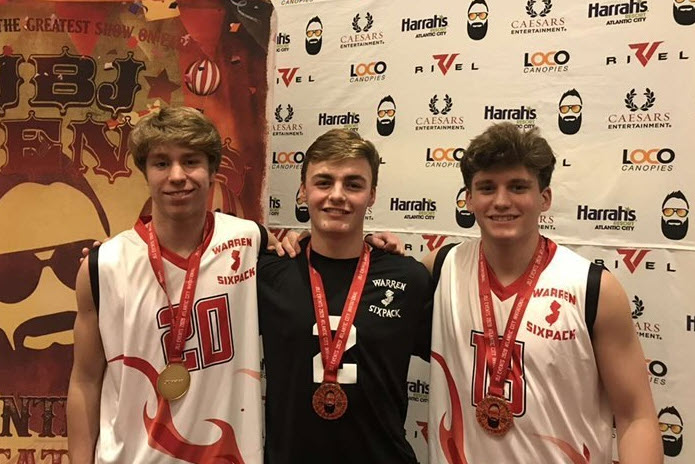 Colin Stevens has jumped up in the player ranks quickly over these past two years in the State of NJ and in NJ High School volleyball. He finds himself now playing on NJ’s best club team with an arsenal of highly talented players around him on the attack. He has played with Warren Six Pack for the past two seasons, originally as a 17-2 team member while a junior and has now risen to NJ’s top team at the 18 level.

Stevens will be set to quarterback what is expected to be one of the top high school teams in NJ this Spring in Christian Brothers Academy. Coached by the legendary Monica Slattery, CBA was on unfamiliar grounds during the 2018-2019 season, where they played a difficult schedule and fell short of a year end state playoff bid. That young team was supposed to be majorly improved in 2019-2020, but with the season cancellation due to COVID, they did not have a chance to reposition themsleves near the states best. This year however, they have some of the top club players joining together as juniors and seniors, and are projected to be one of the top school teams in NJ.

When you look at Colin play, he is clearly an athletic and smart setter. According to his Coach at Warren Six Pack, Pedro Trevino, “He makes the smart sets, he makes sets hittable and I love his attitude. He is such a joy to coach. This is my first time coaching Colin and I am enjoying every minute of it.”

The difference over the past two years has been the effort that Colin has put in to be at the top of his game. Trevino shared “when I saw him play inside this year I was surprised at how much better he has become. It shows how hard Colin worked in the off-season to become a very good setter.”

At the pace of his improvement, Colin will be making a massive contribution to his high school team as a senior. With recent news of vaccines, maybe the world will start to return to whatever normal will be and the high school season for boy in NJ has a glimmer of hope.

Here is our interview with Colin…

Tell us a bit about yourself, Colin?

My name is Colin Stevens, I go to CBA and I am a 2021 graduate. I live in Avon by the Sea with my mom Terri, and my sister Cassidie.

I started playing volleyball my sophomore year of high school. I played soccer my freshman year but decided not to play sophomore year. I had a few friends who played volleyball so I decided to try out. I made the JV team and before the season started I was moved to varsity.

I am 6’1 and I have a 32 inch vertical. I am a setter and I play for Warren Sixpack 18-1 and for CBA. My favorite position to play is setter because I like being super involved in every play.

Tell us about your Colt teammates. Who do you expect will be this year’s standout and up and coming players?

Over the last 3 years we have had a young team. During our sophomore year, our varsity starting 7 was composed of 4 sophomores. Everyone has been getting involved in club volleyball which is helping everyone tremendously. We have a lot of players that could easily stand out this year. Jack Dooling is our outside and also my Sixpack teammate, he is extremely athletic and knows the game very well. I would not be surprised if he had another good year. Andrew Sasso plays on the Sixpack 17-1s and has the ability to play anywhere on the court. He is most likely going to play libero for the highschool season.

You have played on the premier club team in NJ at your age group for the past years. Tell us about what it is like to set some of the best offensive players in NJ?

This year has been a great one so far regarding Sixpack. I’m glad that I am
playing with a really talented group of guys. I am getting a lot of good passes and with my hitters being Christian Trevino, Tommy Deakyne, Dan Marino, Aaron Laplaca, Jack Dooling, Jake George, and Ben Fryc, I have a lot of options.

NJP believes CBA will be a top 5 team in the state for the Spring 21’ high school season. What is your expectation for this year’s CBA squad?

I believe this year CBA will have a lot of success during the spring. We have a lot of depth and skilled players. If there is a state tournament this year, I believe CBA has a very good chance of winning a state title.

Tell us about your club volleyball experience at Warren Six Pack.

My experience over the last two years at Sixpack has been awesome. I started my junior year and I have had the opportunity to be taught by many great coaches. Everyone there loves the sport and whether we win or lose, it is still a great experience.

Tell us about your CBA Coach Monica Slattery.

I have never met anyone who loves volleyball more than Coach Slattery. She is alawys thinking about the upcoming season. It is really good to have a coach who has been in the volleyball scene for a while. She is always pushing us whether it’s on the court or in the classroom.

My mother and Grandparents inspire me.

I do plan on playing in college, I have looked at many schools but I have
narrowed my choices down to Arcadia, SUNY New Paltz, and Sacred Heart.

In college I plan on studying economics, accounting, or business marketing.

Beach or Hard Court? Which do you like best?

Initially, I didn’t really like beach volleyball, but after playing a lot of it this
summer it has definitely grown on me. But I would personally prefer to play indoors.

All of the coaches at Sixpack have helped me tremendously. Two coaches that really helped me get seen and into contact with college coaches was Coach Slattery and Sixpack director Fred Siegle. Both have a lot of connections with coaches and players.

Which high school or club player was the toughest competitor that you faced and why?

The toughest team that I faced was Southern this past year at the Kean University high school tournament. It was a very close game but Southern is extremely disciplined on defense. They are almost comparable to robots when talking about discipline.

“Playing club and beach with my friends really made me progress into the player that I am now. When I was 11, I was diagnosed with type one diabetes. Having to keep up with my blood sugar before, after, and during games. It makes it worth it when I am able to play the sport I love.” –Colin Stevens