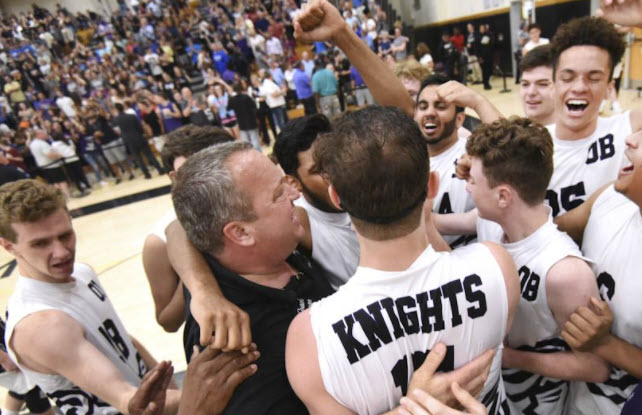 Defending champs Old Bridge takes our preseason #1 ranking for the upcoming spring season of 2021. The Knights will be going for the three-peat after last years complete cancellation of the high school volleyball season. Old Bridge will be powered by a number of returning players such as Rutgers commit Aaron Laplaca, Zach Cuisinier, Rob Obdyke, and Nick Schon. The Knights also have a dozen club players that will be joining the squad and powering a deep bench including Brian Snook, David Flores and Matt Manfredi. The Knights know how to win and will certainly be the target school to knock off the top of the hill.

CBA slots in as #2 with several top club players on the Colts roster. Setter Colin Stevens and outside Jack Dooling, both members of the Warren Six Pack 18-1 team, will put up a powerful offensive attack. Throw Andrew Sasso and Paul Davis into the mix, along with other Colt players waiting in the wings, and you have a top contender for the state title.

The 3, 5, and 6 slots are driven by some of the top players in NJ. St. Joe’s has D1 commit Christian Trevino, who is headed to NJIT this fall. Southern has arguably the best player in the state in OH Tommy Deakyne and St. Peter’s Prep will be powered by 6’5″ Rutgers commit Aidan Apito at outside.

Ridge is one of the most intriguing Top 10 teams. They have 7 top level club players in their age groups in addition to Aidan Zhou. They will be a team to watch in 2021. Hunterdon Central and Hillsborough, as always, will have a deep team of talented players. Hunterdon’s group has all banded together this winter at CJVA and includes senior Daniel Albano. Hillsborough players have grouped at CORE and will be lead by outside Vinil Shah.

#8 Livingston has many club players, more than any other school other than Old Bridge. And they have junior Chris Lynum, one of the best outsides in the North. Jackson Memorial slots in to complete the top 10. They have the dynamic duo of Ben Fryc and possibly the best libero in the state Konrad Bieniek.

This year is expected to be a wide open affair with any team in the top 40 having a chance to get to their sectional final.

Some teams that have really jumped up since our last ranking are West Milford, Hudson Catholic, Gloucester Tech and Clifton. Moving down just a bit from their top 5 dominance in the past are traditional powers Fair Lawn and Bridgewater Raritan. Harrison is #30 with no returning players and no club players but the Blue Tide always have a great turnout and could end up much higher by the end of the year.