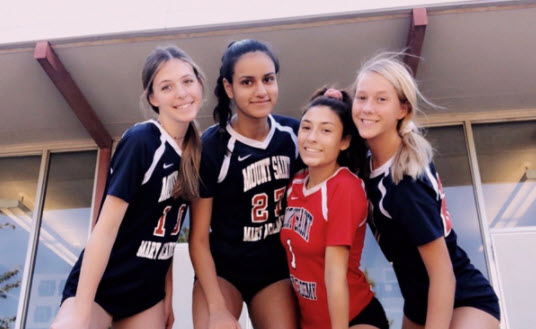 The Mount Saint Mary Academy Mounties are coming off a great season where they accumulated 20 wins for the campaign. They drew Union Catholic in the state tournament second round but could not get by the 30-2 Vikings despite a spirited effort. One of their shining stars was sophomore Mariella Hilyard.

Hilyard led the team with 140 kills in her second year at varsity. She also contributed 55 digs and 34 aces. The Princeton Volleyball Club member intends to crank up it up a notch after losing 4 seniors including Madison Wright and Abbey Kelly on the attack and setter Margaret Brautigan. Mariella will most likely be the go-to leader on offense as a junior.

Mariella certainly has the makings of a star player. She has a smooth transition on the attack and textbook swing. She gets great velocity on her hits and can be a nightmare to dig. She tallied 34 aces last season and we will likely see an improvement in her ace/game stats. But the biggest area of improvement that we expect to see is on the block. At Club, she has started to hone her blocking skills and at near 6′ and an athletic vertical, she can start to dominate this Spring.

It should be a fun short season for the Mounties and for Mariella this Spring. If they get off to a quick start, the sky is the limit for achievement. And for Mariella, the colleges will be lining up to recruit this talented and energetic leader.

Here is our interview with Ms. Hilyard…

Tell us a bit about yourself, Mariella?

I am currently a junior at Mount Saint Mary Academy, so I will be graduating in 2022. I live in Monroe Township with my parents and our dog Lexie. I have two older brothers, Michael and Joseph, but they have both moved out. My brother Michael played volleyball all throughout high school and is one of the reasons I started playing.

When I was younger, I remember watching a lot of my brother’s high school games. Sometimes I would even take a volleyball to the corner of the gym and try to pass it against the wall. I was really interested in the sport from watching my brother play so much. When I was 8 years old, I told my mom I wanted to start playing and she signed me up for camps. I played my first year of club volleyball when I was 10 and the next year, I started at Princeton Volleyball Club and I fell in love with playing.

I’m 5’11 and I have a 26-inch vertical. I play as an outside hitter, but I also played as a middle for many years. I have been playing for Princeton Volleyball Club for the past 5 years, right now I’m on the 17’s National team. Even though I haven’t been playing as an outside for very long it’s definitely my favorite position to play. I love the feeling of getting a perfect set and hitting past a huge block, so I get really excited at all the opportunities I get to swing.

Tell us about your Lion teammates. Who do you expect will be this year’s standout and up and coming players?

We lost four of our starting players from last year, but we still have a really solid group of girls. We have a lot of tall players so we’ll be a huge blocking team this year. Since we have all been playing with each other for a while now, we formed a strong bond, which will help us a lot on the court. I believe we have a lot of potential as a team, but I think juniors Semrit Nijjar (OPP) and Claire King (MB) as well as freshman, Mahalia Gorham (MB) will make a big impact on our team this year!

NJP considers you as one of the top players in the state. Are you already considering your college choices? What do you plan to study in college or what is your career path?

I would love to have the opportunity to play in college; it’s something I’ve wanted to do since I’ve started playing. Academics has always been extremely important to me so I’m always going value my education before anything else. I plan on studying biology in college and finding a school that has a great biology program is really important to me. I hope to be able to find a competitive school and also be able to keep playing.

Tell us about your club experience at Princeton VBC?

I’ve had the most amazing experiences while playing for Princeton. When I first started playing, I honestly didn’t think I was going to stick with volleyball, but playing there helped me realize truly how much I love playing volleyball. I’ve been able to travel to so many places for tournaments and we have even been to USAV Nationals twice. I have also been extremely fortunate to have coaches that put so much time and effort into helping us become stronger players. I’m currently on the 17 National team, and although we had a slow start because of COVID-19, we have a lot coming for the remainder of the season. This is my third year with Coach Nancy Yasalonis, and my second year with Coach Jeff Yasalonis. Having them as coaches has been amazing, they care so much about our team and work so hard for all of us. They are constantly pushing and motivating me to become a better player and have taught me so much, I’m really grateful for the both of them. I have formed some of my closest friendships at Princeton and every season have been extremely memorable.

What do you love best about being an outside?

What I love most about playing as an outside is being the pinch hitter during chaotic plays. I love that my team can rely on me to put the ball away when we need it.

You had a such a solid sophomore season at Mount St. Mary with 34 aces, 140 kills and 55 digs. What are your goals for the remainder of your high school career?

Originally, my main goal was just to beat my record number of kills from last season. Since this season is going to be much shorter because of the pandemic, my goals have changed. As a team, we have a strong chance to win the conference this year, so I’d love for us to bring home a big win. Personally, my goal is to just be a reliable player on the court, someone my team can count on when needed. I also want to try and beat the school record for kills by the end of my high school career.

Tell us about your current coaches at both PVBC and Mount St. Mary.

My coaches at Mount Saint Mary are Coach Darek Libucha and Coach Francesca Sengel. Coach Darek works with us a lot on our skills and strength while Coach Sengel helps us with the mental aspect of playing volleyball. She is always checking in with us and gives the best pep talks to help calm our nerves and motivate us to play harder. My club coaches are Coach Nancy and Coach Jeff Yasalonis. They are both serious about training us and shaping us into better players and better people, but they’re also lots of fun and are always laughing with us. They always have our backs, on and off the court, and are willing to help us no matter what we need.

Last season, I think Alexandra Kwasnik from Union Catholic was the toughest competitor we faced. She’s such a well-rounded player and her swings were really tough to dig. She has a huge block to so hitting against her was a challenge. Playing against her motivated us all to play harder.

My club team always listens to Pretty Boy Swag by Soulja Boy during our warmups. It’s definitely my favorite thing to listen to it gets all of us really pumped up to play.

My favorite volleyball player is Kendall White. I’m in awe every time I watch her play. She’s behind every ball and is always digging up crazy swings that look nearly impossible to get to. I’ve been working on my passing a lot recently and watching her makes me work so much harder.

I’ve struggled a lot with my confidence on the court and I often beat myself up over mistakes. Coach Nancy Yasalonis has helped me so much to grow and realize my potential. She puts so much faith in me and she’s always pushing me to become the best player I can be. Over the years I’ve had her as my coach, I’ve gained a lot of confidence in myself and have learned to let things go. I feel comfortable talking to her about anything and I’m always relieved when she gives me advice.

Girl’s Blog for 9/15 is posted at http://njpowerranking.com. Check out our inner look on the NJ high school girls volleyball landscape. https://www.instagram.com/p/CT3N_jAsCgA/?utm_medium=twitter

What possible significance can this number have in relation to NJ high school girls volleyball? Find out at http://njpowerranking.com. https://www.instagram.com/p/CT1UsRULVf8/?utm_medium=twitter

Don’t forget to check out NJP’s “Loch of the Night” picks to motivate some upsets on the NJ Girls high school volleyball scene… at http://njpowerranking.com https://www.instagram.com/p/CT1OlogA4Lq/?utm_medium=twitter

Volleyball improves to 2-0 with a win over Mahwah today. #family

Such an amazing victory at todays tournament!

To have a solid team, you may need to embrace the new person and make them feel a part of the family… https://www.instagram.com/p/CTyf8EuKgPa/?utm_medium=twitter