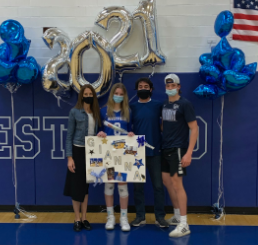 Westfield has had a truly amazing season thus far and have a solid group of talented student athletes who take their volleyball very seriously. They have strung together ten wins in a row, earned a 12-1 record thus far, and picked up a Union County Championship in the process. One of their senior contributors is Gianna Mangiamele who is truly having a season to remember.

In the short season thus far, Gianna has put up some impressive numbers for the Blue Devils. She has a team leading 120 kills in 13 games as well as 119 digs. She has also added 18 aces and 9 blocks.

Gianna is a power player on the attack. She uses her 5’11” frame to her advantage and you can instantly see when you watch her play that she has extensive club experience. She is sound technically, has solid jumping abilities, and possesses a powerful swing that is sometimes impossible to defend. She is one of the top pin hitters in the state. She has an excellent VBIQ, never appears out of position, and can be effective at both outside and opposite.

She is also surrounded by a world of talent at Westfield. Senior Emma Hanley has had a knockout year as well for Westfield mirroring the statistical numbers of Gianna in many categories. Chloe Kreusser has anchored the middle and seniors Anna Tichenor and Victoria Toal have steered the attack as setters. Senior Rebekkah Dayon has been solid on the back row and Kerry Donovan has lead the team in aces. Junior Taylor Addis leads the team in blocks. It has been a full team effort this season and their still is a path forward to accomplish one more goal.

A state sectional championship is very much in reach for the Blue Devils. They remain on track with a first round bye and now are focused on three more games to finish out their season. If the seeds hold, Westfield may end up facing North Hunterdon in the Championship match, which would be an epic match-up of similar style teams in the final. But there are games to win before that happens, so we will wait and see.

For Gianna, it would be a storybook ending for her senior season in a year that we weren’t sure would even happen. She is continuing her academics and her volleyball career at Franklin and Marshall in Lancaster, Pennsylvania this Fall. But Gianna still has an untold story developing that will drive many memories that will last her for a lifetime.

Here is our interview with Ms. Mangiamele…

Tell us a bit about yourself, Gianna?

I am currently attending Westfield High School in Westfield NJ. I will be graduating this year, 2021.

I have been playing volleyball for about 7 years now. I was inspired to play volleyball by my cousin who was playing at the collegiate level at the time.

Tell us about your Blue Devil teammates. Who do you expect will be this year’s standout and up and coming players?

We have a lot of strong players this year, who are each doing their part in helping the team succeed.  The seniors have all really stepped up during games to win, as well as through encouraging the younger players on the team.

NJP considers you as one of the top players in the state. Tell us about what went into your decision to continue your volleyball career at the collegiate level at Franklin & Marshall.

Volleyball has been an integral part of my life thus far and I have been fortunate enough to have been given the opportunity to play at the collegiate level. Franklin and Marshall provides the perfect environment both academically and athletically for me to succeed. I am very excited to attend the school next fall.

Tell us about your club experience at VB Rags?

My experience at VB Rags has helped me to develop as both a player and person. I have received excellent coaching which has furthered my overall game and love of the sport.

Westfield got off to a great start, winning 4 of 5 games. You had a great game against conference rival Kent Place. Tell us about the 3-set thriller…

The game against Kent Place was definitely a team effort. I was very pleased with our win and the fact we were able to pull through in the end and make a comeback to take the third set. We faced Kent Place again, and the team worked in unison to prevent them from scoring and finished in 2 sets.

Your lone loss this season was a powerful Hudson Catholic squad that is moving up the ranks quickly. How do you think you would fare against them if you meet again?

If we were to face Hudson Catholic again, I look forward to the challenge. I am confident in the abilities of my teammates to come together and hopefully take the game

You are averaging 10 kills per match thus far this season. Think you can keep up that pace?

I think that I can definitely keep up this pace. When my team works as a cohesive unit, we all do our part. The back row players have been passing extremely well which allows the setters to set up the hitters. Being an outside hitter, I definitely appreciate this and hope to continue to my streak.

My high school coach, Beverly Torok has been influential to me in many ways. She always pushes me to do my best and better. She has seen something in me since my freshman year and I want to thank her for believing in me all these years.

My club coach, Carly Rivera has been with my for many years. He has been an instrumental part in my development both in my game and my character. I look up to him and his successes in the volleyball world. He is very educated on the sport and he has been a mentor for me.

Hudson Catholic was probably the strongest competition we faces so far. They are a very strong team and I hope to play them again!

I love to bake and cook with my family and friends.

I was disappointed that we were not able to play during our regular season and compete in the annual Pink Out game to raise money for breast cancer. This is a big part of the program, so it is unfortunate that we were not able to participate. During game and practices, all players are required to wear masks. Off the court, we are quarantining as a team and being diligent to ensure that our season is not cut short.