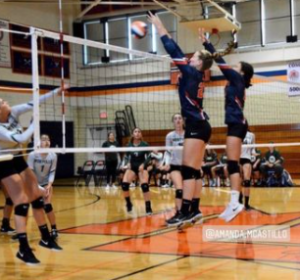 Mountain Lakes girls varsity volleyball has done something they have never done before—win a playoff game. The program was started up by the school just three years ago and now they have advanced to the North 1 Group 1 quarterfinals.

“This win means so much to me and the team,” Rachel Curran said, “It allows us to believe that in just 3 years, we can make it to states and win games. My sophomore year, all of the other girls in my class and the freshman (now juniors) made a goal to become State Champs in 2020-2021. That goal is becoming a reality, and it is right there in front of us.”

Mountain Lakes made few mistakes in the contest, but Curran was really pleased with how the team was able to move on from play to play.

Curran noted, “When we made a mistake, we immediately forgot about it and moved on to the next play.”

Senior outside-hitter Rachel Curran led the team on the offensive end with 7 kills, adding 8 digs to go along.

Setter Elizabeth Clark dished out 12 assists, and spread the ball out really well to her teammates.

Service was a key part of the Lakers’ success, as the team totaled an unthinkable amount of service aces. Mountain Lakes completely fooled the Paterson Arts serve receive, as the Lakers floated in 21 total aces as a team. Jordan Colombo and Marissa Argen both tallied 5 aces apiece, leading the team.

Mountain Lakes will take the trek to Midland Park for a date with the 1-seed. The winner of this contest will take part in the NJSIAA Section 1, Group 1 semifinals.