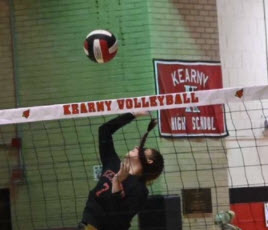 Despite the shortened schedule, Kearny put together a very succesful campaign for the Girl’s Spring volleyball season. The Kardinals took on Hudson County and despite losing to Hudson Catholic, the perennial top 10 program in NJ, and Union City, one of the emerging power teams, they handled all other takers and headed into a quarter final match in the state sectional tournament.

Unfortunately, the Kards faced North Hunterdon, a dominating team from Central Jersey and considered one of the top 20 teams in the state. It was a valiant effort that fell short and ended the Kardinals season.

One of the shining stars for their program this year was Kierra Lugo. “Kiki” is one of the teams top pin hitters who lead the squad in kills averaging just under 3 kills per set. She also did very well on the service line as did many of the Kearny players. Kiki loves to play the game and it’s a bitter sweet end to her high school career. Starting next week, she will be there to support her brother Ethen who plays for the Top 25 boys team. She credits her inspiration and involvement in volleyball to him.

She leaves the program with the hope of playing in college and is evaluating her options. But she also leaves knowing that she was a part of a Kearny team that produced the best winning percentage in a decade as well as their first state tournament win over the same time period. And memories of a senior year that was far from normal in any sense. A many stories to tell for decades to come.

Here is our interview with Ms. Lugo…

Tell us a bit about yourself, Kierra?

I’m Kierra Lugo. I go by “Kiki”. I attend Kearny high school, am a senior and I live in Kearny. I graduate this year in 2021. I live with my mom and dad, Jose and Deanne, and my 3 brothers Anthony, Cristia, and Ethen. We are all close in age, especially me and my younger brother Ethen. We are 11 months and 2 weeks apart from one another.  Our family has always been athletic and very competitive toward one another, and that has always driven my motivation to be better.

I have been playing volleyball since my sophomore year in high school when I started off on the JV team. My brother, Ethen, is mostly the reason why I played my sophomore year. He always pushes me to try new things. My family was very supportive when I went out for volleyball. I am so blessed to have the amazing support system filled with my family and friends!

I am 5”6 and I don’t truly know my vertical but in pictures you can definitely see me getting off the ground. I play all around on the court but my main position is outside and opposite. I play mostly in the front row. I don’t play for any club teams actually. In my free time, I like to play at the court they have at West Hudson Park. It’s a definite challenge playing there. I would have to say that opposite and outside are equally my 2 favorite positions.

Tell us about your Kardinal teammates. Who are this year’s standout and up and coming players?

My Kardinal teammates are definitely a big part of my volleyball career. All the players on the team are a huge asset. They all put 100 percent into every game and practice.  The team motivates me to stay consistent and doesn’t let me give up so quickly. The girls are all talented in many ways, good passer & hitters, and the girls all pull through together to win our games.

NJP considers you as one of the top players in the state. Do you plan on continuing your volleyball career at the collegiate level? If so, which colleges are you looking at?  What is your career path?

It is truly amazing to be considered one of the top players in the state! I want to try and continue to play wherever I decide to go in college. I always wanted to play in college as an opposite or outside hitter. Colleges that I am currently looking at are Saint Peter’s University, Felician University, NJCU, and Bloomfield College. My career path is Business Management and Interior Design.

Kearny has had an outstanding season thus far losing just two matches to strong teams, Union City and Hudson Catholic. How did it feel to get a first-round state playoff victory over Plainfield?

It was such an amazing feeling to get that victory over Plainfield. It wouldn’t be possible without our entire team effort. We put our all into the game! It was a rough start at the beginning of the game but at the end we played smart and made smart decisions.

Tell us about your coach at Kearny, Vicky Zicopoulos…

Coach Zicopoulos has been an athlete her whole life, and she was offered the coaching position for volleyball as a freshman coach. After that, her coaching role expanded from there. I got lucky to have an amazing coach like her. Coach Zicopoulos always pushes the girls to show our true potential on and off the court. She is a good support to have when you’re feeling down. She’ll make sure you feel good before and after a game.  I am very sad to be leaving coach Zicopoulos after my 2 years on varsity, I’m going to miss the huddles before the game and after. Like Coach always says “Have fun guys, but it’s always more fun when you win”.

Tell us about your last game with North Hunterdon…

The North Hunterdon game was a good game, but even though we lost, at least we know we played our best! It wasn’t how I wanted it to end but at least it was a very memorable season, and I can’t wait to hopefully further my career in volleyball. Good luck to the North Hunterdon girls!

There were a good number of girls that were tough, but I think the toughest competitor I had to overcome was myself. I would always get discouraged after messing up a serve, pass or hits, but I had to find it within myself to just do better. After getting over those mistakes, I realized no one is perfect. You just can’t bring yourself down or else you’re praying on your own downfall.  I was competing against myself to be better. I realized that I was my toughest competitor.

My favorite song that gets me in the mood to play or just motivates me in general is “Dreams and Nightmares” by Meek Mill. The reason for this is because I always wanted to get recognition for my hard work, and I am completely blessed to have an opportunity to be able to do an interview with NJP.

Coach Zicopoulos and Coach Savage pushed me to be the best version of myself. If it wasn’t for these two Coaches, I wouldn’t be having this opportunity to interview right now. Another person that has helped me is Nicholas Brunelli, our school Athletic Trainer. Ever since sophomore year on JV, he has been taking care of any injury to my wrist or ankle. He is an important asset to any sport in this school. I am glad to have a trainer that doesn’t hesitate to help you out when you need it. He is one of the best trainers out here! Thank you to all 3 of these important assets of my volleyball career.

My support group is anyone who helped me become who I am, especially my family and my friends who were by my side from the absolute beginning. My brother Ethen Lugo, Alexandra Martins, Juliet Hernandez, Aysha Perez, Melanie Suarez, Julie Fernandez, Nathan Aguliar, and Santiago Lopez are the people who I constantly play with all the time on and off the court. These people I mentioned are a key to my success in volleyball.

The COVID-19 has been such a crazy impact in this season and off season. Luckily, since my family is very athletic, we had put a volleyball net in my yard and continued to grind and play when the weather was nice. It was a lot at first with the COVID-19 pandemic happening, but I was lucky enough to have my family, my friends, and my boyfriend there to support me through this very rough time.