The Power Point System… Does it Work? 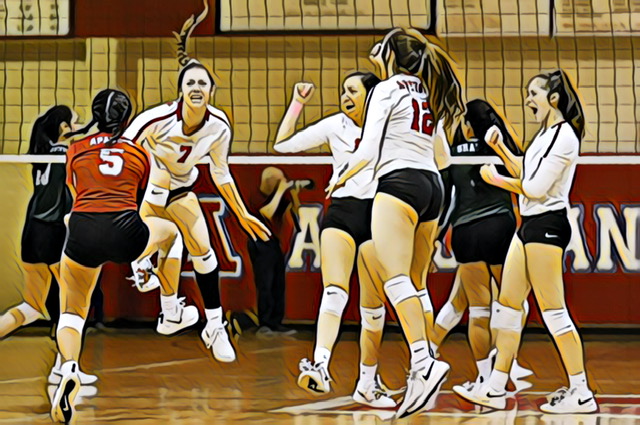 The Power Point system was put in place to bring objectivity to high school playoff seeding. In theory, this sounds amazing. A real system that will lay down the rules ahead of times, which every team has to comply with, and strip away the subjectivity that occurs in the typical process. To be fair, we have never sat in “The Room” to sift through all of the team records, who they played, what was their margin of victory, and who is ultimately higher seeded. A super tedious process that is just prone to one coaches opinion over another or the sqeaky wheel getting their opinion heard.

So just how objective are power points? Let’s consider some factors…

We came into this article thinking that there were a number of flaws in this system. But our research here has been done with a completely open mind as we used the data to drive our decision-making.

There has to be some basic assumptions made for the system to work. For girls volleyball, we make the assumption that the larger the student population of a school, the stronger the program will be. By dividing the four regions of the state into 4 different groups of similar size enrollment, it should be a very fair process. Each group tournament would have teams be able to stay in their region, limit travel, keep the playing field level, and produce highly competitive games in a bracket that will go three rounds with an eventual state sectional title to the victor.

In theory, you have to love the concept. It captures the essence of high school sports.

At NJP, we tend to get lost in the math. We are over analyzers! When in doubt, we look at more numbers in a hope of finding the real truth. But our typical approach when evaluating a statewide system is to laud the adminsitrators and officials who compile a fair system. They deserve a massive amount of credit to take the time to evaluate and create impartiality. We know they have every child who plays sport in the state’s best interest in all of their decisions.

Here are some numbers…

We are presenting three data points here. One is the average NJP rating of all members of each group. The second is the NJP rating point of the top 6 teams in each bracket. And third, we show the earned power points on average of each of the groups. The third data point was adjusted downward by a factor of 3.5 to bring the gradient closer to the NJP data. To our surprise, the data patterns are very close. One can say they are almost identical. So in this scenario, with a high level of statistical significance, we can say the PP system works. That is, if you trust that the NJP rating algorithm is valid.

The other analysis is much more simple. Based on the results, how did the seeds do and were they part of the final two teams battling for a state sectional. Now, one can say that the seeds actually contribute to the top seeds advantage. So a team that did not make the finals may have been effected by the tough road to the finals. But for this example, let’s ignore that theory.

Remembering this is such a unique year with the pandemic, some of the seed challenges were due to teams being quarantined and not playing many games. The aberrations that we saw this playoff season where very good teams received lower seeds, such as Bogota, Old Tappan, Moorestown, and Barnegat, were all driven by pandemic related stoppages.

It is clear from the analysis for this sample size that the residual point system is quite effective and it can be accurately applied in high school sports venues to determine a fair, equitable, and pre-determined and transparent system for seeding.

Kudos to the NJSIAA. Of course no system is perfect, and there will always be debates, but it certainly appears that the efforts made to bring a fair system have worked.