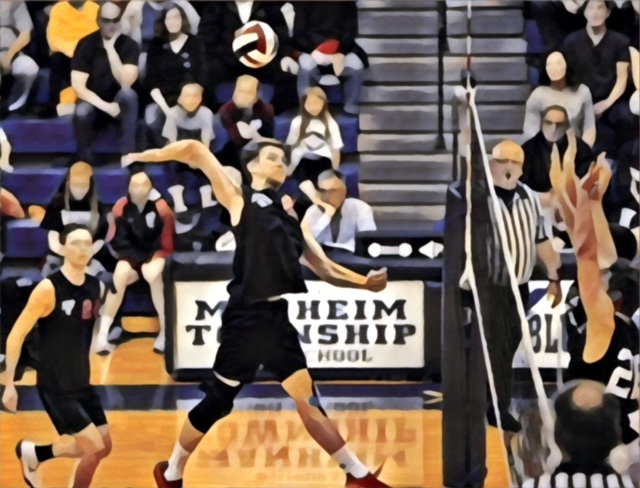 We are back for the second night of the season, a rather short schedule of games (we are used to the girls schedule which sometimes had 110 games). This was the second Championship night for the girls which indicates the end of the girls season. So we expect to be focusing our full-time efforts on the boys within the next week or so as we wind down our final rankings and awards.

On to the boys…

One of the big games tonight was Southern vs. Williamstown. Southern wasted no time in re-establishing themselves as a New Jersey power team by handling Dubtown in straight sets and did it quite convincingly. Outside Hitter Tommy Deakyne is one of our preseason favorites for Player of the Year. But Southern always puts out a well developed and mentally prepared team to hit the floor. They love playing games in volume and are usually one of the teams with the most games played in a season. They have added all top three NJP preseason teams to their schedule, Old Bridge, CBA, and St. Joe’s Metuchen. They do this with confidence and expect to win every game they play. Oh, and they have another Kean on the roster. 6’3″ OH Lucas Kean is following in his brother Justin’s footsteps who was an amazing high school volleyball athelete and is now a freshman at D2 Belmont Abbey.

The St. Joe’s Metuchen instagram account introduced us to their varsity team yesterday via pictures and profiles. For us, Head Coach Miguel Cabrita sets the gold standard in coaching high school volleyball. Which always atrracts players from various geographic locations to play for the private school. A player to watch is sophomore middle blocker Scottie Schmitt. The team already has club players Christian Trevino, Mike Weikum, and 6’4″ John Toolan but Scottie is 6’10” and still growing… We will see what he brings to the table for the Falcons.

Marlboro has one of the best duo’s at the shore in Nicholas Brzoska and Dan Marino. They won their first game against Freehold and the boys had 11 and 8 kills respectively. A team to watch for sure…

As expected, CBA got off to a great start tonight beating a strong East Brunswick team in straight sets. Dooling from Stevens will be the main combination all year long. CBA is NJP’s #2 preseason team. In addition to East Brunswick, Coach Slattery has added Southern and SPP to the schedule so far in addition to their regular shore opponents.

Randolph starts off their varsity program with a bang beating Vernon tonight in straight sets. Kieran Lucas had 11 kills and Harrison Green had 22 assists. Congrats to the Rams!

Summit edged Westfield in three sets in a battle of UCC rivals. Great start for the Hilltoppers.

Kingsway is a perfect 2-0 after two night of the season. They took care of of the 2019 South Jersey sectional semi-finalist who finished 22-4. Dragons breathing some early season fire!

Tons of games (42) on the schedule for Wednesday. Some top match-ups include Jefferson @ Harrison, SPP @ West Milford, and St. Joe’s Metuchen @ JP Stevens.

Looking ahead to Thursday… Livingston heads to Bridgewater Raritan, Kingsway is at Williamstown, SPF visits Bloomfield, and Kearny is in Union.