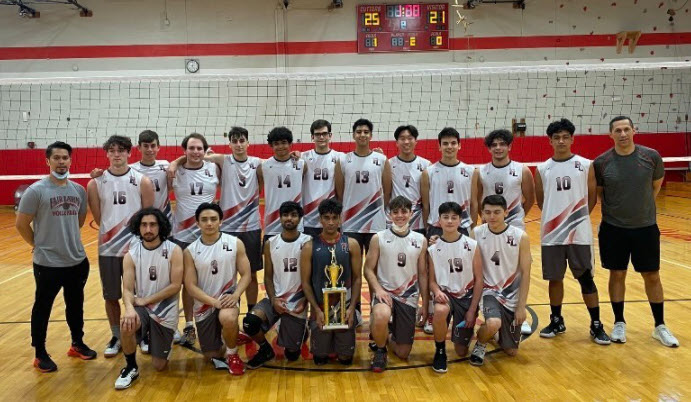 Last season could have been one of the most prolific in Fair Lawn volleyball history. But the pandemic altered time and space for the Cutters who had 5 returning all-state players from their team which reached the NJ state playoff finals. Losing all of those players to graduations except for setter Gil Zyndorf, it was unknown whether the Cutters could return to their typical North dominance.

Fair Lawn has stacked their schedule as usual with top rated teams as well as their Big North rivals. After ten games, they found themsleves 5-5 but still in the NJP top 20 due to quality of opponents and a strong schedule strength factor. They then went on a 8 game winning streak, taking down teams like Kearny, St. Joe’s Metuchen and Wayne Hills. They had given West Milford their only loss of the season and last week fell vistim to the Highlanders as their only blemish since May 6th.

They did not lose a set in the Bergen County tournament, buzzing through Teaneck, Indian Hills, and the Championship game against Don Bosco in straight sets. They received the #1 seed in the North 1 sectional and are heavily favored by NJP to make it to the semi-finals and finals. We are projecting a possible semi-final against Bergenfield or Bosco and if they win, a final against either Jefferson or West Milford. We asked senior setter Gil Zyndorf about the sectionals and he showed great confidence in his teams abaility to advance. “On the North 1 Sectional, if we play our game, there’s no doubt we’re coming out on top” Zyndorf told us. He added “Our biggest challenge will be West Milford. Ryan Thenell is an excellent player for their team”.

As far as today’s match, Fair Lawn battled a solid Don Bosco team that came into the match at 18-3, and gave Fair Lawn a run for their money despite the straight set result. Both games were tight with FL winning 25-22, 25-21. “We played as a team today and had ups and downs” said Itay Akad the Cutters outside hitter who put down 12 kills and 2 blocks. “But at the end of the game, we were able to close out in 2 sets.” Akad continued… “It was a really good win today and as usual Gil led our offense. Our middles Adwait Ganguly and Dan Choi have also picked it up a lot and our libero Hari Patel and right side Massimo Caravaglia have also improved immensely.”

The Cutters remain confident that they are the team to beat in the Sectional. “I think that going into Sectionals and States, we will really surprise people with how effective our offense has become” added Akad.

Fair Lawn is now 16-6 and will drive toward a 20 win season and beyond.