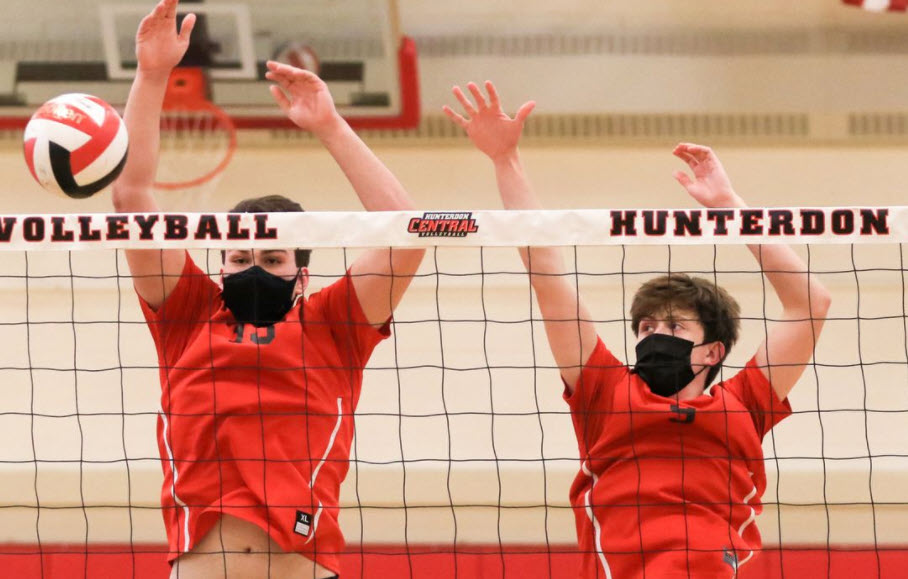 Hunterdon Central has been a dominant presence all year on the NJ boys high school volleyball landscape. The Skyland conference is traditionally one of the bets in the state and this year is no different with 4 of 5 teams in the top 20 mix all season long. The Red Devils have been a clear leader winning the division and the Conference tournament tonight in straight sets over Bridgewater Raritan. HC has only lost 2 matches all year, both in three sets to league rivals Ridge and BR. They have beaten Hillsborough the two times they played this year and also added Colonia, Livingston, East Brunswick, Ridge, Rancocas Valley and Newark Eastside to their victory resume.

The strategy of this team has been to keep the ball in play, let opponents make mistakes, and spread the offense to multiple players who can put the ball away, whether as a hitter or a blocker. They are an exceptional blocking team with almost 100 blocks this season in 18 games. They are also averaging 25 digs a match.

Every player is contributing to this teams success. 15 players have statistical contributions. And you just never know from what side of the court the offensive charge will come from making it a difficult defensive assignment for their opponents.

Senior Daniel Albano has been outstanding on defense and has 168 digs along with a team leading 17 aces. With senior Gavin Lefebvre stepping in for injured setter junior Corey Paulson in game 8 has brought a new level of energy to team. The Red Devils have size and athleticism. Matt D’Allesandro has been a force all year with 74 kills, 22 blocks, and 23 digs. Tom Menyhert has 80 kills and 18 blocks while Will Kwietniak leads the team with 30 blocks and has added 49 kills. Senior Avery Gould has put down a team leading 118 kills in the balanced offense and his younger brother Seth, who is a junior, has contributed 22 kills and 26 digs. John Harwell has been a standout as well with 59 kills and 5 blocks for the season. And lets not forget the defensive contributions of junior Sam Winter with 50 digs and 7 aces. It’s a well balanced, well coached, and deep high school volleyball team that will be tough to put out of the state tourney.

The Central Sectional is off the chart good. It is every single year with their top 10 usually in making up a large piece of the top 20. It’s an issue for a number of years but is so tough to solve with the geographic focus of Central and South. Maybe it needs to be East and West with a reconfiguration but a problem to solve for another day. Right now Central needs to figure a way to get by CBA and Old Bridge. Their path to the Final Four could be Marlboro, BR, Old Bridge, and CBA. That’s a tough road. But at 16-2, they could very well find themselves as the one left standing in the super competitive Central Sectional.