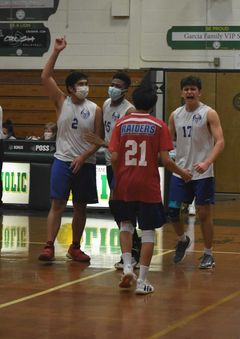 Scotch Plains Fanwood is now 22-0 for the season and have added a Union County Tournament Championship trophy to their school showcase. To say it was a hard fought victory at Roselle Catholic tonight would be the understatement of the year. Union has had an amazing year as well of 3 of their four losses coming at the hands of the Raiders. Each game has gotten closer throughout the year and tonight’s match was as close as you can get. The Raiders prevailed 25-22, 23-25, 26-24.

Union is one of the most difficult teams to penetrate on the block. And this aspect of the Farmer’s game kept them close all night. They have size, jumping ability, and instincts that anticipate opponents attacks. SPF’s setter Nick Schmidt was charged with distributing the offense away from the block and he did that masterfully with 37 assists. Nate Sta Rosa smashed 16 kill from the right side and Tim Ennis had 11 from the left to lead the Raiders. Aidan Heifetz and Anthony Ngumah had 5 kills each.

The sophomore setter Schmidt has been amazing all year long. His 37 assists tonight leave him just short of 500 on the season which is second in the state and of course first for his sophomore class. “Union is a great team and it took a combination of hard work from every player to get the win” said Schmidt who also has 30 kills and 27 aces for the year.

The Farmers lit up the scoreboard statistically as well with Nathaniel Thompson putting down 11 kills and Spencer Boayke jamming 10. Nathaniel Odusanya and Ryan Lin had 8 kills and 7 kills respectively and Alex Boulin added 6. Union had 21 blocks on the night.

Tim Ennis, SPF’s freshman sensation told us “We worked hard as a team, and it paid off, Union is a great team. We had to work really hard to win and work around their block.”

Sta Rosa picked the perfect time to have his best night of the year. Nate now has 166 kills for the year and also has 67 aces. Sta Rosa was excited after the win. He shared… “Today, was a hard fought game and we pushed through to win the County Championship as a team. Thank you to everyone who came to support both in person and online. Let’s Go Raiders!!” According to Freshman Tim Ennis, “Nate is Mr. Reliable”. A great compliment.

Senior Tony Ngumah has been a great leader for the Raiders this season and they enter the most important part of their season. He shared his perspective… “I’m really thankful to have been able to have a season our senior year, and it has been greater than I could even imagine. It’s been a great year getting to know the team and having fun on the court with everyone. I would like to thank everyone who supported us this year and couldn’t ask for a better team to play with.”

As unlikely as it may seem, there is a chance that these two teams could meet again in the North 2 Sectional final. Union will have to get through Ridge next on Wednesday and will likely play #1 seed Kearny next if they advance. Kearny beat Union earlier in the season. And Newark East Side may be waiting after that before they reach the Sectional final. So a very tough road.

SPF has Newark Tech next on Wednesday and probably Livingston after that before the potential of playing Payne Tech or St. Peter’s in the semi-final. SPF is NJP’s favorite to win the North 2 sectional.