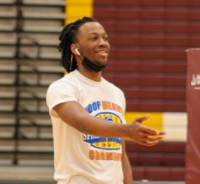 The make-up of volleyball team are an interesting dynamic. Having all of the pieces of the puzzle put together to create a winning team is always a challenge. For the Union Farmers this Spring season, all of the components have been coming together driving a 17-4 record and a big quarter-final state playoff game on Friday against #1 seed Kearny.

For junior Alexander Boulin, his development into an outstanding opposite hitter has fit in to the Union attack plan like a glove. Union has one of the most balanced offenses in the state giving setter Faraz Bhatti multiple options in his offensive strategy. Boulin is one of 5 players that are at or near the 100 kills mark for the season. And Alex has made such an enormous contribution with athleticism and leaping ability on the attack and on the block.

Alex has 112 kills, second on the team, and has also contributed 30 blocks. But the synergy that Boulin brings to the team dynamic has been a perfect fit on squad that has so many pieces of the puzzle finely meshed together for their playoff run.

Alex is a solid jumper, and has a quick swing that is so hard to defend. He puts up a strong block, like many of his teammates, giving Union a massive defensive front that will serve them well as they get deeper in the playoffs. In tomorrow’s game, Alex will match up against Santiago Lopez of Kearny, one of the premier hitters in the state. He will play a key role in Union’s ability to knock off the #1 seed.

Here is our interview with Alex Boulin of Union…

Tell us a bit about yourself, Alex?

I attend Union High School and I live in Union, New Jersey. I am graduating in the year of 2022. I have four siblings, two brothers and one sister.

I am 6’3, I play opposite, I don’t know my vertical, and I have never played club before.

Tell us about your Farmer teammates. Who are this year’s standout players?

I would say this year’s Union high school standouts are Nathaniel Thompson (Outside), Ryan Lin (Outside), Nathaniel Odusanya (Middle), Spencer Boakye (Middle). These people are all our top scorers and blockers and I think our team will crumble and wouldn’t be as good if we are missing any of them. They are crucial for our team to be able to win states.

I 100% plan on going to and playing in college but I am also undecided on which school I want to go to. My plan is to wait and see what colleges have to offer for me and try to choose from that list. In college, I plan on majoring in athletic training. I chose this path because if everything doesn’t work out perfectly, I can still be able to shoot for having a job that includes sports, which I truly want to be able to do as an adult.

Union has had an amazing season thus far. Can you tell us about your rivalry with SPF?

The Union high school team takes our rivalry against SPF very seriously. The first time we went against them, we didn’t have our full starting lineup, so we weren’t as strong as we could have been. The second match rolled around and we showed that our team, that wasn’t ranked as high as SPF, can still compete with a great team. We pushed them to a third set and fought as hard as we could but unfortunately lost by two points in the end. Our third match in county finals was when we wanted the win harder than ever. We came prepared, played to our fullest abilities, pushed them to a third set again, took them to overtime, and unfortunately lost for the third time with a score of 24 to 26. We plan on doing all we can to try to advance far in states so we can get another crack at SPF in the finals and possibly win this time around.

Is this Union’s year?

This is Union’s year. Even though we are coming in as the underdogs we plan on beating the big dogs and defeat the teams to come and win the championship in states.

The best part of this season is being able to play and get better with my teammates and friends as we pushed forward in the season to get where we are right now.

We came into their gym knowing that we had to go through this great team to be able to advance in states, so we came as prepared as we could. Throughout the game our team was neck and neck with Ridge. When playing, we knew we had to watch out for their #4, Justin Hong, who was an outstanding hitter that repeatedly shut us down. In the end, both teams fought hard with Union coming out victorious getting pushed to overtime in the second set with a final score of 24 to 26.

During the offseason, I am normally very active in the gym going about 5-6 times a week. This year, I plan on joining a club to further increase my skill and be as best I can for next year’s season. In middle school I played football for two year but was introduced to volleyball 9th grade, fell in love with it and made it my main sport.