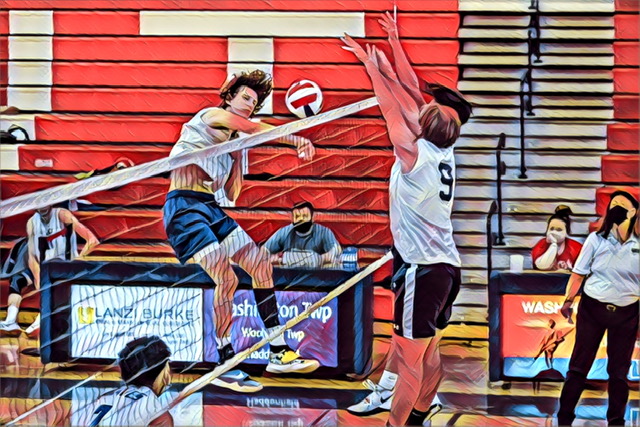 It’s one of the busiest night’s of the year trying to report on 30 second round state playoff games. There was some amazing volleyball being played around the state. We feel very proud to be a very small part of supporting the NJ volleyball community as all the focus is on state playoffs now and the final run to the State Championship. One lucky team will emerge over the next two week and be able to raise the championship trophy over their heads. It should be an amazing ride until the season culminates in South Brunswick in the early evening of June 14th.

Every remaining player in the tournament shares the same dream. Of the 32 teams that remain, and the roughly 500+ players with high hopes, only one team and about 15-18 players will be able to say they are a State Champion. In our books, especially after last year’s season cancellation, and the uncertainty that has hung over NJ Boys high school volleyball all season, we consider all players and coaches heroes. We know moving forward, whether winners or losers, we will all be stronger individually for enduring and persevering this season. And the bond between players and teammates will live on much longer than the end of this season. You have had the chance to participate in a game you that you love with your friends by your side. This was something that could not happen last year. Let’s be grateful to have played the game and carry a positive perspective forward whether it’s on a college court, a beach, or a backyard in the future.

We have brief one-line summaries imbedded into our bracketology update tonight so we encourage our fans to review that page going forward for the next 11 days as well as daily blog. The link can be found on the main menu on the homepage or you can just click HERE when ready.

Here are some additional inner look items in addition to the bracketology summary:

NJP selected three rather major upsets according to seeds tonight. The games involved were #9 seed Colonia vs. #25 seed Howell, #11 seed Wall vs. #6 Bridgewater Raritan, and #12 seed Gloucester Tech vs. #5 Eastern.

Despite the math, Howell has been underrated almost the entire season, not making it into the NJ.com top 20 and totally dismissed in the seeding meeting with a #25 in the sectional. NJP has Howell as #20 overall in NJ which is mostly driven by Howell’s strength of schedule, them playing #1 CBA so tightly in their matches, and their score differential despite the heavy schedule. We picked Howell to emerge victorious in a three-set match which they did with a convincing third set victory over a very solid Colonia team. They are one of just a few teams that have taken a set from CBA and the Colts represent 3 of their 5 losses. Because of the seeding, they will now face CBA in a quarter-final on Friday which makes their road overwhelmingly tough. The NJP Predictor obviously favors the states number one team in the match, but Howell is in a unique position here as they have stayed close to the Colts in all their matches and certainly have the potential to upset as a top 20 team.

Wall was ranked #7 in NJP’s ranking release from yesterday. Bridgewater was ranked #19 but got the #6 seed where Wall was awarded the #11 seed. The home court worked the Panthers advantage as they clipped Wall in three sets. NJP had the matched predicted for a Wall win in three sets but the Panthers proved us wrong with a well earned 27-25 win in set 3. We have a very similar case for BR’s next match as the #14 seed Marlboro has a higher NJP rating than BR by 2/10 of a point. This signals a sure three set match for the Predictor and could go any way, but we are giving Marlboro with Brzoska and Marino the slightest of edges Friday.

And lastly of our underdog picks, NJP had Gloucester Tech at the 12 seed primed to upset #5 Eastern despite the Vikings 18-3 record coming into the match. The algorithm has held Eastern in the ranking range between #30 and #40 in the state despite their great season and dominant record. This was driven by strength of schedule factors mostly and GT was rated slightly ahead of Eastern at the time of the game. Gloucester was able to prevail by the slightest margin, 25-23 in their third set to advance.

Overall, the NJP Predictor yielded a 7-1 record in both North 1 and North 2, a 6-2 record in Central, and a perfect 8-0 in the Southern sectional giving us a 28-4 record for the second round and an 86% win percentage. This is consistent with our 87% win percentage for the regular season in well over 700+ games selected.

It was interesting to see Newark East Side struggle a bit with East Orange this evening. The Jaguars took the first set from the Red Raiders. East Orange had a great year at 13-4 and rose up to play a spirited second round match against NJ’s #10 ranked team. Nick Lima flat out took control of this one in set 2 and 3 posting a whopping 31 kills, 2 blocks, and 4 aces. This will add to his already top rating in the state from the NJP Player Rater. We interviewed Nick last month and we just can’t help but root for him this season. He has an amazing story and is one of the most humble and nicest students we have had the pleasure of interacting with this season. Great job Nick!

Hats off to Jackson Liberty who ended their season tonight with a loss to East Brunswick. The Lions were big underdogs coming into the game in “Bear”-town and they played hard and never gave up, grabbing the second set 27-25. Lions setter Dollir Churyumov is one player of many that we interact with often at NJP and his passion for the game exudes through his DM’s. We look forward to covering Dollir through his senior year next season.

#17 Marlboro upsetting #10 Hunterdon Central was one of the biggest news items of the night. Hats off to the Mustangs as they move on as they have proven they are team to be reckoned with moving forward. And Congratulations to Hunterdon Central on winning the Skyland Conference, winning the Skyland Tournament, and putting together a 16-3 record against some of the best competition that NJ has to offer.

We appreciate everyone jumping in and voting on all the various clips. We have intentionally not shared the immediate results or current standings for the contest. The results will be posted on Sunday night, June 6th after the 8PM deadline. There are some outstanding clips to watch if you have not viewed them all. The viewing goes fast as the clips are at most 15 seconds or so. You can do all 24 in about 5 minutes. The players have done a great job of collecting and submitting these highlights. And it is very evident that NJ volleyball continues to improve as one of high school’s fastest growing sports. It was so hard to pick all the finalists with the pure volume of submissions, so we appreciated your patience in getting everything launched. The boys division was absolutley overwhelming and we needed to create a process to vote internally on all the various entries. Many top-quality clips did not make the final cut and we are trying to share the many of them including the honorable mentions when time allows this week. So stay tuned. All of the groups were put tohgether randomly. In fact, many of the state’s top players are in Group C so please make sure to give that some attention. Group A has the most votes, Group B second, and Group C third which is human nature. The top three from each category will advance to the final which voting will end the night before the State Championship game. For the Girls, we will have our winner Sunday. As well as for bloopers.

REMINDER: If you have all-county or all conference coaches awards, please send them to us for posting at njpowerranking@gmail.com

Kudos to these Passaic County stars who made the Coaches All-County Teams: