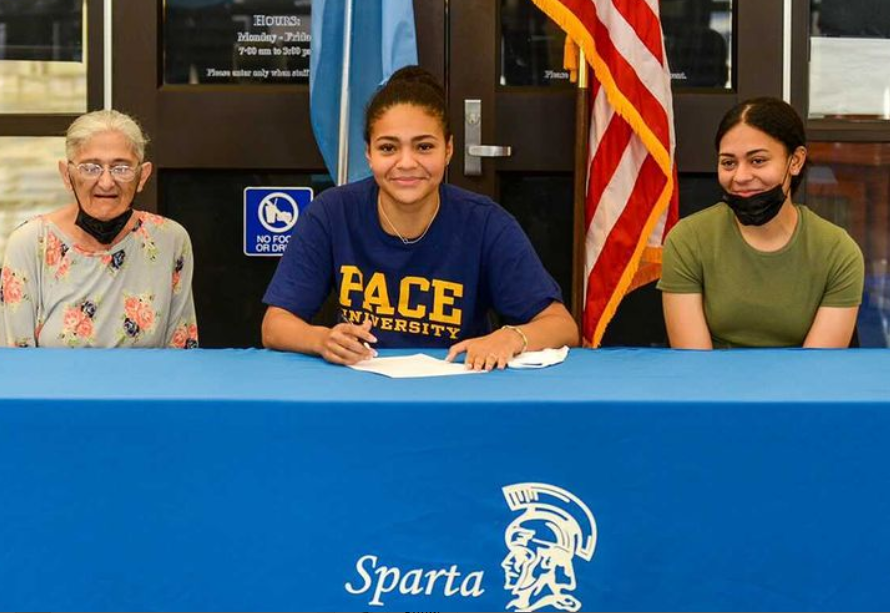 Abbastante, or ‘Abs’ as her teammates would call her, has decided to take her talents to Pace University where she will be a big piece of a program looking to turn things around. The Pace Setters are D-II level and compete in the Northeast-10 Conference.

“There were a lot of factors that I tried to keep in mind when I was choosing a school. I knew I wanted to be in New York or close to New York, and I really liked the Pace campus,” Daniella said, “Talking to Coach Granger from Pace felt very fluid and real, so I knew we could build a great bond. Pace had everything I was looking for in a school and in a volleyball program.”

Abbastante, a middle-hitter for Sparta, will be playing a big role on the Pace volleyball team.

“I talked to Coach Granger briefly about this, but basically she’s going to move me around between right-side and middle-hitter, which I’m really excited for!” she said, “I think I could really be effective as a right-side hitter.”

Daniella Abbastante finished her Sparta volleyball career with 121 kills, to go along with 79 blocks. Her career high in blocks was 5, which came in the NJSIAA Group 2 quarterfinals against Governor Livingston.

“I am going to miss a ton about Daniella, going to miss her monster kills, big time blocks, and her incredible sets. We are going to miss her a ton on the court but we are really going to miss her as a teammate and a leader in this program. In all my years of coaching, Daniella is one of the, if not the best “teammate” I have ever coached. She has an incredible and different relationship with every single person on the team. She is always there for her teammates and is the ultimate team first player.”

Hall always had confidence in Abbastante, even in the most important moments.

“In our state championship game, when the first set was 24-23, she got her first hit blocked, covered, and then wins the joust at the net for the game winning point,” Hall said, “Daniella is never afraid of the moment and comes alive in the most intense moments of the game. As a coach I always felt a sense of security knowing that if Daniella was on the court she would come up with a big play!”

What will ‘Abs’ miss most about high school volleyball? Well, she had lots to say!

“Honestly everything! If I had to say one thing it would be how genuinely nice and supportive everyone in the program is. This includes the coaching staff, the moms, and my teammates!” Daniella said, “Also, I’m going to miss Garden State Elite Volleyball. The environment and coaching staff there really helped me improve as a player. I’m very grateful to have been a part of two great programs!”

Abbastante was most recently part of the 18 National team at Garden State Elite Volleyball Club, and her coach was Christian Balbutin.

Coach Hall also had some thoughts about his middle-hitter.

“My first thought was just how happy I was for her and how proud of her I was,” Hall said, “My message to Daniella was just go be you at Pace. I know Daniella is going to make the most of this opportunity in every way and again, just so happy for her!”