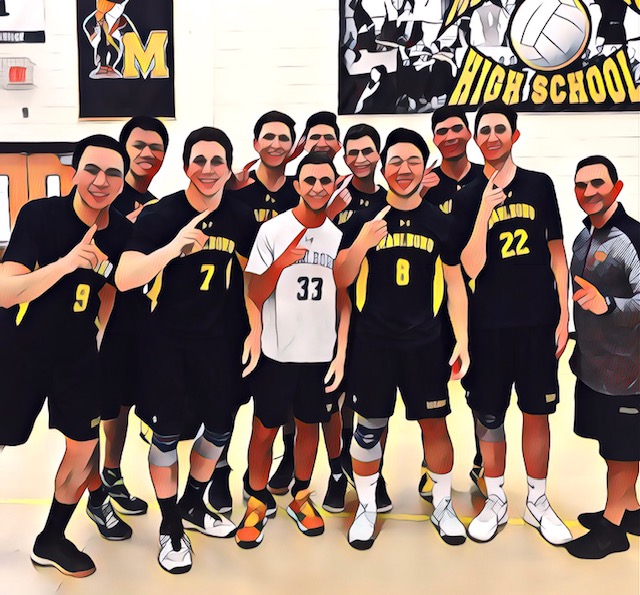 Certainly some surprises tonight in the NJ Boys High School Volleyball Sectional Finals. There are just 4 teams left in the hunt for the NJ State Championship but every winner tonight took home a State Sectional Championship.

Let’s start our review with Southern’s demolition of Jackson Memorial. After starting the season 13-0, Southern suffered their only loss of the season to CBA. Since that time, they have taken 16 in a row and seem to be getting better every time they hit the court. Southern has the largest rosters of players who have statistics in NJ. Coach Maxwell has done an amazing job of getting his players active and contributing.

Senior outside hitter Tommy Deakyne is the anchor of the team and has a world of talent. “I’m really proud of my boys and I feel we’ve been getting better each day as a team”, said Deakyne. “We always stick together after each play and we are hungry to play from the first serve.” Deakyne also told us…” I wouldn’t want to be surrounded by another group of boys and coaches.”

Tommy’s 9 kills tonoght took him to just 14 away for 300 on the season. 10 players got on the scoreboard for the Rams tonight as the soundly handled the Jags 25-11, 25-20. Senior middle Keith Jeranek has been coming up big in the rivalry games of late making a major contribution against CBA four games ago and also adding 5 kills and a block tonight against Jackson Memorial. And another shout out to Dylan Lockwood for the Rams. What a great performance tonight for the senior setter as he had 20 assists, 3 kills, 3 blocks, 4 digs and an ace.

Southern will now host the Fair Lawn Cutters on Friday night. The Cutters defeated the West Milford Highlanders in a thrilling three set match, the only 3-set match of the sectional finals. Fair Lawn and West Milford are so evenly matched despite very different approaches to strategy and team make-up. Fair Lawn puts defense as a priority and builds off the offensive strategy of Senior Gil Zyndorf at setter.

Zyndorf told us… “Our defense was amazing today. Our Libero Hari Patel did a great job of playing defense and listening to coach Zisa on positioning. Most importantly, we played as a team and were able to prevail after losing the second set.”

Itay Akad has been a standout at outside for the Cutters. He added 11 kills tonight as well as 4 blocks. But he told us that he has a greater goal in mind. “Were playing right now for the seniors who couldn’t last year. Everything we do is for them and we will continue to work until we achieve our goal.” Akad has pounded 244 kills and 28 blocks this season so far.

Roee Shalom had 11 kills and 9 digs for the Cutters while Dan Choi had 6 kills and a block. Both Hari Patel and Cobey Sedaka anchored the defense with 14 and 12 digs respectively.

Fair Lawn got out to a quick start but West Milford battled back to take the second set. But Fair Lawn built momentum in the third set and never looked back, taking the third game 25-18.

Ryan Thenell had a great game for the Highlanders with 15 kills, 13 digs, and 5 aces. But it wasn’t enought to propel WM to a victory.

Zyndorf added “It’s a great victory for us, but we are far from done and still have two more games left to win.”

St. Peter’s Prep won the North 2 Sectional title with a close, straight set win over #1 seed Kearny 26-24, 27-25. Both teams fought hard in the Kearny gym that may have reached 90 degrees during the match on this hot steamy June Wednesday. Prep and Kearny’s rivalry goes far beyond Volleyball as they usually match-up in sectional finals in most all sports.

The gym was absolutely packed on both sides and it created an atmosphere that clearly indicated the start of getting back to normal after the pandemic.

Kearny got off to a great start taking a 6 point lead early in game one powered by Santi Lopez kills but Prep chipped away with 2 runs that shifted the momentum back to the Marauders. The Marauders received offensive contributions from many players, as Tim Jimenez masterfully spread the offensive attack. Prep jumped to a 24-20 lead before closing the set out 26-24.

The second set was equally as even as lead changes dominated the scoreboard. With Kearny leading 22-20, their all world outside hitter Santiago Lopez went down with an ankle injury as he took a misstep approaching the net. Prep jumped back into the lead but Kearny battled with their star player watching on crutches. The Marauders kept firing and fought off a game point to win the set 27-25 and take the Sectional title.

Aidan Apito was stellar all night, especially with his passing, but he had 8 kills and 7 digs, as well as an ace and an assist. Junior outside hitter Joe Parise had his best game of the season, and his Prep career, with 8 kills, 7 digs and an ace. Tim Jimenez had 23 assists and 10 digs and senior opposite hitter Jake Landsbergis added 4 kills and a block. The Prep middles also were stars tonight as Pius Mwemba had 6 kills and 3 blocks and Ryan Karbowniczak added 5 kills.

For Kearny, Lopez and Marcello Garcia had 7 kills, and Kevin Chalaco and Ethan Lugo had 17 and 12 digs respectively.

The Marauders will be traveling south on Friday night, riding their 8 game win streak, and their travels will be to Old Bridge rather than Holmdel. The Knights, who are looking for the first three-peat in NJ boys high school volleyball history, won one of the most epic battles seen this year against #1 CBA.

The first set at CBA was a test of wills. Both teams knew the importance of taking the first stanza and would not relent in their pursuit to close out the first set. It was a classic battle of back and forth, anxiety driven, pull your hair out volleyball as the game extended to extra points. It took 70 points to be put up on the scoreboard to determine a winner as Old Bridge prevailed 36-34. As is so typical with extended sets, the loser often goes down in set 2 and Old Bridge took the opportunity to drive that momentum to a second set win at 25-18. It was CBA’s second loss of the season and evened up both teams record at 21-2.

CBA controlled their own destiny and had positioned itself to take the next three games and claim their #1 slot and state championship. But #3 Old Bridge would not be denied and continues their quest for three in a row. “This year has been a challenge for everyone, it’s just a test to see who is most driven” said Brian Snook, Old Bridge senior outside hitter. “Within the next rounds, my team and I will keep a clear mind with one goal; victory.”

“CBA is a great team, we brought everything we had today.” said Knight’s setter Nick Schon. “I’m so grateful for my teammates I can really rely on anyone to put the ball down when it matters most.” Schon has had a great senior season thus far tallying over 500 assists for the season. He moved past that mark in tonight’s game. “Today’s game was more than just a W, we showed the state what we are made of.”

Schon added, “Now it’s time for us to get back into the gym and film room to prepare for Tournament of Champions prove all the odds wrong and be the first team in New Jersey history to be 3 time state champions.” Old Bridge will host #6 St. Peter’s Prep Friday night.

After 1,300 games, we are now down to just three games left for the NJ Boys high school volleyball season. More analysis tomorrow on the final 4.

We say goodbye to CBA, Jackson Memorial, Kearny, and West Milford tonight. Congratulations an outstanding seasons and making it to the state sectional finals.

And for some inspiration…