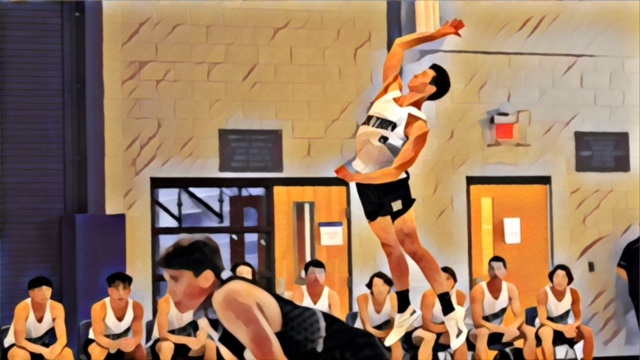 The TOC semi-final games were today. The NJ HS State Championship finals are now set. Old Bridge will get their three-peat chance against the Southern Rams on Monday at South Brunswick.

Old Bridge was dominant tonight. Andrew Hopman’s game plan worked, plain and simple. The St. Peter’s Prep Marauders never got into a rythym. The Marauder block could not contain the OB attack. Especially Brian Snook on the left side and Aaron LaPlaca in the middle. Each had 7 kills for the Knights. Nich Schon was an all-star all night long. He kept SPP off-balance for the entire match. And the Knights block completely shutdown the duo that has been terrorizing the North, Jimenez and Apito. It was just a great all-around performance by the Knights. Tonight, they were the far better team on the floor.

It was the first time we experienced the opening introduction of the Old Bridge players. I think it was better than the opening for a NJ Devils playoff contest. Lighting, music, glow sticks, ravid fans cheering on their team, all well orchestrated and timed like a NY symphony. Even an appearance by the Old Bridge Knight, plastic sword in hand. Quite impressive.

At Southern Regional, the Cutters of Fair Lawn got off to an amazing start and looked dominant taking the first set 25-19. Fair Lawn had a lead in the second set and then the Southern Regional machine took over. With Tommy Deakyne leading the way and Ethan Case playing perilous defense as well as being a monster on the service line, the Rams surged to win the second set handily. The third set was much the same as the second. Tightly faught early, and then the Rams pulling away in spectacular fashion to win the match 2-1. Great showing by both teams, but the Rams earn the right to play Old Bridge in the state final on Monday.

The NJP Predictor picked both winners. We expected the FL/Southern match to go three and the Rams winning. We also anticipated the SPP/Old Bridge going three with OB winning. That match went to OB in straight sets. But we will take the two wins.

We expect Monday’s game will be a dogfight. We also expect it will go three sets and the victor will be the number one team in New Jersey as well as State Champion. We will complete the analysis this weekend and post our projected winner by Sunday night when we unveil the winner of the Boys NJP Clip of the Year. (Make sure to vote)

NJP End of Year Awards will follow the conclusion of the season. A full gamet of player, coaches, teams, and a wide variety of more out of the box awards.

Remember, NJP does not stop covering your favorite sport throughout the year. It’s 12-month coverage for our favorite fans. Thanks for all your support over this very intense double-season of fun for both girls and boys high schools. We are looking forward to covering the beach season and Club Nationals. The Girl’s high school season will be starting before you know it in the Fall as well as Club Seasons. NJ College volleyball will follow for women and then Men. And then the Boys will start-up again next March. It’s a wonderful cycle.

If you can, come out to South Brunswick for the final game of the boys year on Monday. It’s an amazing environment with the stands filled with great players and coaches from all Sectionals. Plus, you get to see the State Champion crowned. You won’t want to miss it.