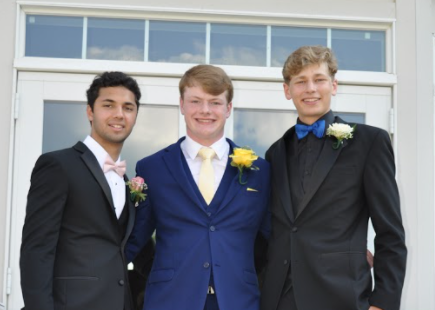 The Boys High School volleyball season is over for just about a week now and we have been immersed in preparing year-end awards and trying to finalize our end of season rankings. We still have many open invites for player interviews and received a message from Pope John senior Mike Lavin. We have been following Mike’s accomplishments this season at Pope John. And after reading his responses, we wanted to post his player interview, even now after the season has ended.

Mike is a bright and articulate young man. He will be heading to Villanova this Fall. We are leading with one of his more intriguing answers to an NJP questions asked on almost every interview: Who is the toughest competitor you have played against this year? We think Mike nailed this one!!!

“Our toughest competitor this year was easily team COVID. We had gotten three games into the season, and soon after, our whole team got quarantined. There were no practices or games for two week. The first time we touched a volleyball as a team after that was against Sparta (cross town rivals).  There was no chemistry among us, and it was an extremely difficult first set. We ended up losing that first set, but things came together, and we were able to take back set 2 and 3 to win the game. Team COVID gave its best effort to beat us, but we came back stronger and hungrier to give our best.”

As we reflect back on the season, and all of the issues and challenges the players and coaches needed to overcome, we have so many things to be thankful for. It gives us all perspective, especially when tapping into our feelings from last January (Will there be a season?), last March (What will this season look like and will it end prematurely?), to current times as we emerge from the pandemic with renewed spirit and a volleyball state champion.

The Lions had a difficult road as well. They were undermanned, sometimes having just six players available for games. As Mike mentioned, they started the season 2-1, and then fell victim o a two week quarantine. They returned and gutted out a victory in the first game back and then continued to run off seven straight wins. They ran into a buzz saw facing Jefferson but bounced right back with 5 more straight wins before losing in the state tournament to West Milford. The 14-3 year was an amazing accomplishment.

Mike was outstanding all year long. He and Collin Mills drove the offense for the Lions with 300 kills between them for the 17 matches. They both also had 245 digs each as six rotation players, never coming off the court. Mike will look to play some club volleyball for the Wildcats in his next four years. We see a great future for Mike as he navigates the next stages of his life and we are very thankful that he took the time to tell us about his season and share his thoughts.

Here is our interview with Pope John’s Mike Lavin…

Tell us a bit about yourself, Mike?

Hi, I am Michael Lavin. I completed four years at Pope John XXIII Regional High School where I played varsity soccer, swimming, and, of course, volleyball. I live in Newfoundland, New Jersey with my older sister, Beth, and older brother, Eric.

My siblings and I have all been involved in athletics from a very young age. It was my sister who joined the Pope John volleyball team her freshman year, which initially intrigued me of the sport. I went to all her games and learned a lot just by watching. When it came to the spring of my freshman year, I decided to give volleyball a try.

I am 6 foot 4 inches with a vertical of 27 inches. Throughout my high school career, I played as a setter, middle hitter, and outside hitter. I never played club, but I always made sure I gave my all each time I stepped on the court to keep up with the players that did play club.

Tell us about your Lion teammates. Who are this year’s standout players?

This year we had an extremely limited roster, but we persevered with our 5 seniors and 1 junior. Outside hitters: Collin Mills and myself. Middle hitters: Jacob Jones and James Bragg. Setter: Dylan Angner. Opposite: Trace Healy. Our one sub for the entire season was freshman Jayden Angner. We had early season setbacks with contact tracing and quarantining, but as soon as we were able to get back we meant business. Covid showed us how quickly our season could change so we played every game as if it were our last. Everyone I mentioned gave 110% in every play, hit, and cheer, and I could not be happier with how they performed.

I will be attending Villanova University in the fall (GO CATS) where I will be studying Mathematics and Political Science. Villanova does not have a division 1 men’s volleyball team so I will be looking forward to trying out for their club team.

You and Colin Mills make for one of the most powerful 1-2 punches on both the attack and defensively in the State. Tell us about how both of you work together on the court.

Collin and I have been friends for a long while now. We both walked into the first practice freshman year and were surprised to see each other. We continually got better and better and Collin actually decided to play club at GSE after his sophomore season. I looked up to him since then as a better player than myself. Every pointer or tip, I always tried to listen and mirror my game after his. I would wonder how he adjusted so well to different sets or how he hit the ball to various spots. I would ask him in practice how to improve and he was always willing to help. Those conversations were simply two amazing friends learning and teaching about the sport they love. I believe we worked together so well because we have been playing on that same court for nearly 4 years. We understand each other on a subconscious level that just comes with time.

We thought Pope John could go all the way in the North 1 Sectional?

Sadly, Pope John did not go all the way in the North 1 Sectional. We played our hearts out though. I cannot stop thinking about how differently things may have been if we had a season last year. Our team would have consisted of the same lineup, and we would have used it as a big development time. It stinks that we did not have that season, but we made the most of this year. As soon as everyone was eligible and healthy to practice, we hopped right in.

The best part of the season was by far the friendships that I made. Of course, the victories and records are exciting, but it does not compare to the laughs and amazing times that I had with my teammates. Some of the games have already started melding together, but practices, bus rides, pre-games, and post-games are distinctive memories I still laugh about.

My motivation stems from my family and friends. They are my backstop; something to lean back on when I may be pushed down. My motivation also comes from my lost time on the court. I really missed being able to play last year, so I came into this season with one goal of enjoying my final season of high school sports. With my friends, family, and limited time on the court aiding me on, I can happily say I had a blast playing this season. I wish it could have lasted a little bit longer.

Coach Vohden is an integral part of Pope John Boys Volleyball. He began the program and has coached it since its birth. Every coach is special, but Coach Vohden is more than a just a coach. He is much more like a friend. We have our inside jokes, team jokes, and the serious moments. Every time this man walked into the gym, there were always smiles gleaming around the gym. I do not know how Vohden dealt with all of us, but he did, and I am forever grateful to have had him as a coach and friend for four years.

Not a story, but more of a memory involves the small intricate moments I had with my teammates. This season, Collin Mills and I began taping our fingers in preparation of our games. Before each home game, we would sit in the corner of the gym in these blue chairs and just talk and tape. We would tape up on the bus rides to away games.  We always managed to find each other to tape our fingers. It is something so small and stupid, but it meant a lot to talk and share those moments with a best friend.