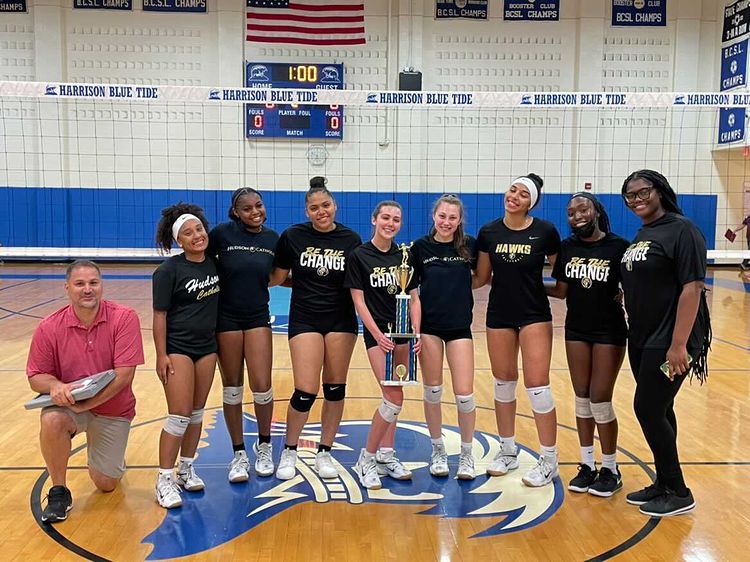 The Hudson Catholic Hawks wasted no time getting back to the grind after a very succesful Spring High School season that ended just a few points away from a potential state championship. They jumped right in to the Summer league at Harrison High School and left no stone unturned with a blistering 5 weeks without losing a set. That carried over to tonight’s straight set win over the Harrison Blue Tide to take the summer league title in the Tournament Finale.

The tournament received high grades from Hawk setter Rachel Hennessey. “The tournament was really fun and competitive. It was good to be able to get some reps in game-like situations before tryouts. It showed us what we need to work on in practice and helped us to bond as a team.”

Kiannisha Santiago gave her usual standout performance for Hudson Catholic. It will be interesting to see how dominant on the attack she will be this fall for the Hawks. According to Harrison Coach Anthony Sabia, he gave her the ultimate comments after the tournament… “She has a hammer!” referring to Santiago’s powerful right arm and her ability to produce kills at will.

Hudson Catholic comes in at #16 in the NJP preseason girls high school rankings for the Fall with well over 300 teams in New Jersey. The Blue Tide stayed with the Hawks in the final match, garnering two of the highest set scores in the tournament against HC.

Hennessey also provided some insights to her new Coach Katria Stewart. “I really love her coaching style! She works on the little things and when we get on the court it shows and helps us a lot.” Stewart takes over this Fall for Coach Fernando Colon, the only Head Coach the program has had since its inception. More on that transition at this link… https://njpowerranking.com/2021/07/25/katria-stewart-returns-to-hudson-catholic-to-lead-hawks-as-head-coach/

Harrison does a geat job in hosting these events each summer. The Boys finals will be this Thursday.