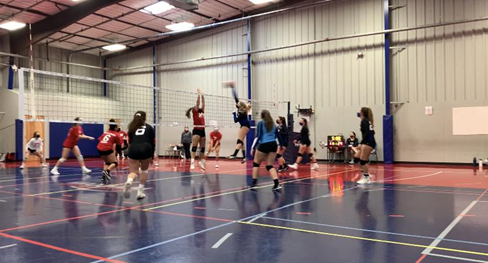 When you are an outstanding athlete, you often get the opportunity to play multiple sports in high school. For rising senior Josie Marcinek, she has balanced her commitments of playing a high level of high school and club volleyball while following her passion toward playing second base for the Raiders on the school’s softball team.

Let’s make no mistake about the numbers. Josie is great at both sports. Take a look at the stats during her junior campaigns. Josie hit .483 as a junior while scoring 11 runs and batting in 13. The Raider’s finished 21-3 before losing a tough 3-2 game against Livingston in the Group 4 Final. What was even more remarkeable about the Hillsborough season is they gave up just 16 runs all year, posting 13 shutouts, and allowing no more than two runs in a game but once, in the 3-2 Sectional final.

In volleyball, Josie played an inspired Spring season. In just 15 games, she posted 82 kills, 32 digs, 5 blocks, and 14 aces. After dropping their first three games, the Raiders won 9 of their last twelve including beating Montgomery, Bridgewater-Raritan, and North Hunterdon. She had one of her best games in the state playoff quarter-final against BR leading the team with 9 kills, despite dropping a three set, season ending game. We expect Josie to run the attack this Fall for the Raider’s in her senior year.

Josie is a competitor. She always rises up to give her best for the rivalry and big games. In her Sectional final softball game, she hit a home run and also pegged a perfect throw to the plate in extra innings, but the ball was knocked loose for the game winning run. She is a leader and shows it on the court, or on the diamond.

Here is our interview with Ms. Marcinek…

How are you, Josie? Thanks for joining the NJP player interview club. Can you tell us a bit about yourself? (What school do you attend, what town do you live? What year are you graduating? Tell us about your family? etc.)

Hi, I am doing well!  I am currently 16, almost 17 and a rising senior at Hillsborough high school class of 2022.  I live in Hillsborough with my parents, my sister and my dog.

I have been playing volleyball since freshman year.  Hillsborough didn’t offer volleyball in middle school, so when I saw it was offered, I decided to give it a try.  What made me try out for volleyball was 8th grade gym class.  Me and my friends would always scrimmage random teams in the gym, and then the following year I tried out.

I am 5’9 and I play middle and outside.  I played for Core Volleyball for three years and my favorite position to play would be outside.  Being an outside hitter, I like to take advantage of where I am, and being able to see the court.

Tell us about your Raider teammates. Who do you expect to be this year’s standout players in the Fall?

I’m looking forward to getting back on the court and playing with my friends this season. We all get along, and we always have each other’s backs and are ready to help each other out on the court. This will be my final season, and I’m looking forward to reuniting with my teammates and having a great final year. Afanwi Numfor and Olivia Gaspar, our middles, will undoubtedly stand out this year. They were both excellent with blocks and hitting the ball close to the 10-foot line our junior year, and I can’t wait to see what they can do this year.  Gianna Lavecchia is another player who will stand out this year. Her passing and serve receive are incredible, and she would always give it her all whenever she was in the back row, and no matter how hard the hit or serve was, she would always get the ball up.

Unfortunately, I plan on playing softball in college so this year will be my last season.  I plan on studying education or psychology in college.

Like many Skyland Conference teams, your roster this Spring was dominated by seniors. Graduating players include setter Kaitlyn Alexander (333 assists), libero Kate Shanahan (170 digs), plus both Noel and Zoe Mastakas with Zoe being one of the Skyland Conferences first-team outside hitters. Can the 7 returning juniors keep the Raiders near the top?

I’m excited about this season, and I’m confident that as long as we have a solid back row, we’ll be able to stay at the top. This year, we’ll have a lot of juniors, and I know that they’ll help our team become stronger and help our back row stay strong.

Your two best games in the Spring were against rivals and top 20 teams Hunterdon Central and Northern Hunterdon. How do you get up mentally for big matches like those?

When we played harder opponents, we just went in with a positive attitude and confidence. Going in knowing you’re going to lose wasn’t an option; instead, we went in with support and had each other’s backs. When someone made a mistake, we told them it was fine and moved on to the next point. Going into a game anxious and with doubt is always a bad idea.

No matter what sport you play, attitude is always an important factor.  You will begin to feel better about yourself after you establish a positive mindset. You’ll treat yourself with greater respect and love, which will increase your positivity and inner strength.  Having an optimistic mindset practically guarantees a successful outcome.

Tell us about your club experience at CORE?

It was an incredible experience to play at Core. I played with the seniors and had an amazing coach, Aspen. I looked up to the seniors a lot, and I’m hoping that this year I can step in and help my team out as much as I can.

Coach Iaonie is one coach who has had a beneficial impact on my volleyball and softball career. She is an excellent coach and someone I look up to.   Even when I’m having a bad day, she encourages me to do better and brings out the best in me. Having her faith in me motivates me to perform even better than before.  I am excited to be spending my last year with her as my coach.

Being an athlete has improved my emotional and physical well-being. It allows me to make new friends and teaches me how to compete. It psychologically strengthens me and shows me how to tackle the challenges that life throws at me.  It taught me the values of sportsmanship and teamwork. Being a student-athlete helps me feel like an all-arounder, which boosts my self-esteem.