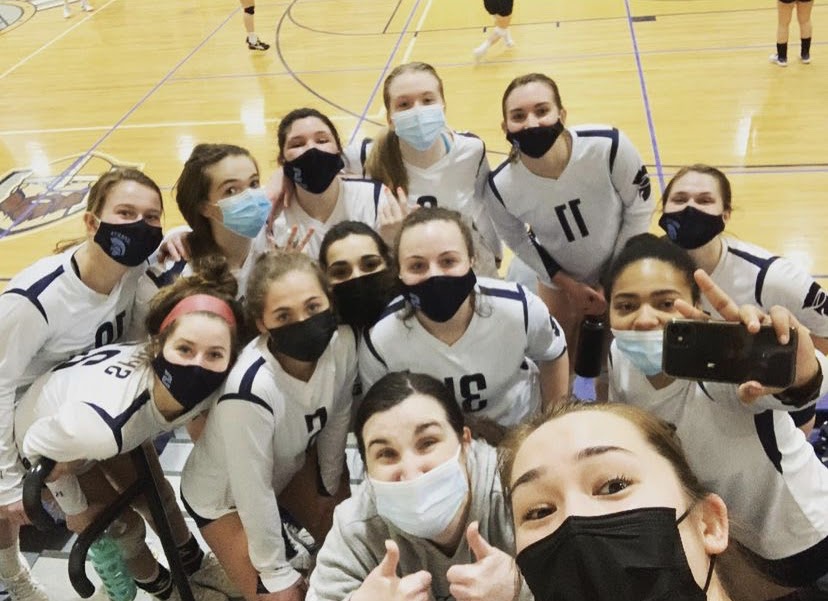 It was a magical season for the Sparta Spartans in the Spring 2021 slate, culminating in a NJSIAA North 1, Group 2 finals win over Demarest. Sparta, who will be seeing a lot of changes in the Fall, will need to make sure they are crisp, taking advantage of every opportunity to put the ball down.

Junior setter Arianna Puleo is going to be a huge piece for the Spartans if they plan on replicating the same success in the Fall 2021 season.

I sat down with the float-serving and setting extraordinaire from Sparta, and got her insights as to what we can expect to see from Sparta this upcoming season.

“My name is Arianna Puleo and I live in Sparta, New Jersey. I am going into my Junior year at Sparta High School and will be graduating in 2023. I am an only child and live with my mom Tracey, my dad Tom, and my dog Piper,” Puleo said.

Puleo first picked up a volleyball when she went to a summer camp in 2016. At first cheerleading was the sport she started with, but with time, Arianna knew that cheer was not the sport for her.

She said, “I decided to play recreational volleyball, and went to camp in the summer. I immediately fell in love with the sport and realized that switching to volleyball was the best decision I ever made.”

Arianna Puleo stands 5’7” and plays her club volleyball for Allegro Volleyball Club. Her approach jump is 9’1” while her block touch reaches 8’4.5”. While setting is her specialty, Puleo also enjoys playing the opposite-hitter position for fun.

Puleo has enjoyed her time playing at Allegro Volleyball Club in Denville.

“Everyone there is so nice and only wants the best for their players! I have played on the National level team there since I was 14 and played locals before that. I have seen many amazing coaches come and go, and actually have a new coach for the 2021-2022 season. I will be on the 17 National Red team which will be coached by Emily Montgomery. I have only met her once, but I can already see how passionate she is about volleyball and how excited she is to coach the team this year. She wants us to succeed,” the setter mentioned.

Regarding Sparta, Puleo let us in on a little of what we can expect from this Spartan team.

“We have nine returning players including myself, and an extremely large amount of talent coming up from the JV and Freshman teams. Therefore I think we are going to excel this year. The key to our success is definitely going to be our communication and teamwork. We are all very supportive of each other, and knowing your teammates have your back goes a long way on and off the court,” the setter added.

With regard to the team’s structure, she said, “We have an excellent lineup of passers, including Sydney Giroux, Marcella Hill, and our two Senior captains, Adrianna Remo and Lyndsey Lang. Watching their passing improve over the past year has shown me they will be essential to our success this season. Our other setter, Caroline Mastandrea, is also important to our team, with her ability to connect with the hitters as well as her variety of volleyball skill sets.”

The Spartans will need to replace their starting libero, Chloe Clancy, among other back-row role players.

Sparta will also be losing NJ Girls Volleyball Player of the Year MacKenzie Wiggins, in addition to Martina Foy and Daniella Abbastante.

“Both Caroline and I are excited to once again have such a strong front row lineup, with our two outsides (Brynn McCurry and Payton Simpson) and our middle (Emily Smernoff) providing a huge and intimidating presence at the net,” Puleo said.

Last season, Sparta was led by Coach Derek Hall. Puleo said, “He is an amazing coach with a ton of enthusiasm and energy. During his time at Sparta, he was able to bring the volleyball program up to new heights, and lead us to our first Sectional title. The team truly enjoyed playing for him, and he brought out the best in each and every player.”

Hall received an offer to be the Athletic Director at Butler High School.

Arianna said, “The entire team is deeply saddened by the loss of Coach Hall, but we are also extremely happy for him! While it is not yet official, the team is hopeful that our new coach will be none other than our assistant coach from last year, Caitlin Jozefczyk! It is extremely obvious how much Coach J loves the sport,” she added, “Her passion for volleyball is like none I have ever seen before. She knows the sport inside and out and is always trying her hardest to make sure that every player is improving so that they can reach their highest potential. Her place as Head Varsity Coach will be official once the Board of Education approves it at the next meeting.”

A coaching change is never easy for a team to cope with, but Coach J is well-known throughout the Sparta volleyball program—the Spartans are in good hands, for sure.

Sparta is in the loaded NJAC American division, which means they have faced a lot of difficult players on a game-in, game-out basis.

Puleo said that the toughest player she faced was Chatham hitter Lauren Burke.

“Chatham was our only loss of the season. She was able to put down 16 kills and 3 aces against us, and even managed to get the most digs (12) on her team. She seemed to be everywhere on the court. I was very impressed with her performance. That loss inspired my team to push ourselves to the next level and made us realize that we had to fight in every single game,” the Junior setter mentioned.

Puleo noted prior that she enjoys working with fellow setter Caroline Mastandrea in the 6-2 offense that Sparta runs.

“For me personally, learning the 6-2 rotations has been easy. The rotations are very similar to ones I had used for my club teams, and they tend to come easily to me. At the start of the season, remembering who my hitting options were was difficult, especially in serve receive when players are pushed back to pass. But, since I always had the same players in for the same rotations, I was able to quickly learn who was in what spot at what time, which was extremely helpful for making quick setting choices,” she said.

With regard to working with Mastandrea, Arianna says the two work very well as a setting corps.

Puleo said, “It has been great working with Caroline. She is always so positive, supportive, and upbeat. No matter which one of us is in at the time, we always get the job done. It really makes no difference who the setter is at any given time. We are both able to adjust our sets to the hitters’ needs so that we can get the best out of each and every player.”

When Arianna Puleo was asked if she intends to play volleyball in college, she said she definitely is planning on it. She is still researching colleges, keeping both volleyball and academics in mind.

“Good academics is also an important factor in choosing a college. I hope to study either biology or zoology, as I love working with animals and have a passion for the sciences,” Puleo said.

While volleyball is Puleo’s main hobby, she also plays softball and sings in the Honors Choir at Sparta High School.

However, sticking with the volleyball theme, it is important to note that Puleo also has helped coach camps and local teams at Allegro Volleyball Club.

Sparta will be an interesting team, for sure. Regardless of the changes that have come to the Sparta volleyball program, they are still experienced and Puleo will be a big piece for Sparta.

For Arianna’s NCSA recruiting profile, Here is the link: