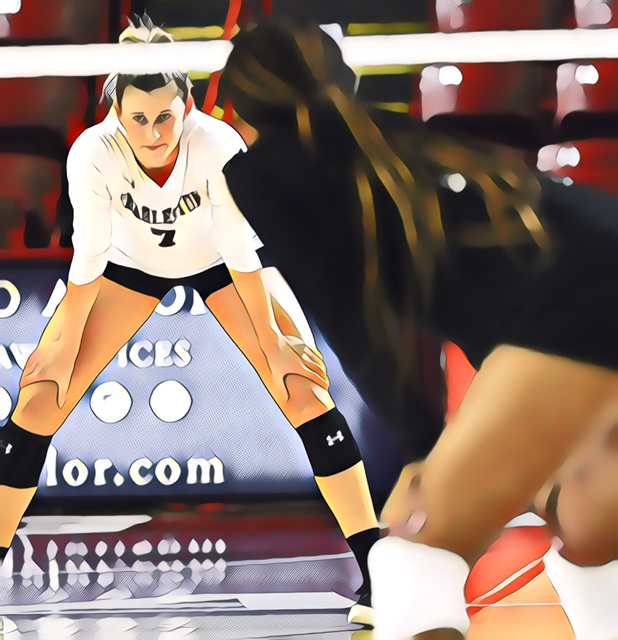 Many NJ high school players go on to play volleyball in college. We feature them on our NJ College Players page on the college menu. You can access using this link: https://njpowerranking.com/nj-girls-college-players/

We picked up some highlights from just a few colleges that showcase some of these players. Visit the link for much more as we have hundreds of your favorite players listed…

There are many articles on the feed page that these excerpts are taken from… check them out at https://njpowerranking.com/the-feed/

FROM NJCU: As mentioned, Jersey City (4-0) fell behind early to the Highlanders (2-5) after dropping the first set. However, NJCU stormed back to win the second and third sets and take a 2-1 lead in the match. Then, after dropping the fourth set which allowed Cairn to force a decisive fifth, the Knights clamped down and emerged victorious to take the victory. Leading the way throughout the night was rookie outside hitter Rachael Pharo (Manahawkin, N.J./Southern Regional) and junior middle blocker Xarial Chandler (East Orange, N.J./University). The former, although she had a tough night efficiency wise, notched a match-best 11 kills to go with three aces and a career- and game-high 23 digs, keeping NJCU in it with every defensive touch all match long. Chandler’s 10 kills was a season-high as she reached that total on 24 swings with five errors (.208 hitting percentage). She also had seven digs, two aces and a pair of blocks. Senior middle blocker Leah Seickendick (Hoboken, N.J./Hudson Catholic) once again stood tall at the net and led all players with four total blocks. She added six kills as well. Sophomore setter Sydney Lore (Marlton, N.J./Cherokee) led all players with a career-best 39 assists. She also contributed eight digs and two aces. Senior libero Madeline Lopez (Elizabeth, N.J./Hudson Catholic) tied her career high in digs with 17 on the night. She also dished out four assists and notched three service aces.

FROM GEORGIAN COURT: Jessica Sprankle (Southern) sparkled on the Georgian Court back line as the junior libero settled 17 digs in the win. Chelsea Ross (Jackson Liberty) ruled the net on the night with the freshman tallying five blocking assists and a pair of solo putdowns for the road team.

FROM FDU FLORHAM: Late in the opening set Hunter held a 22-19 lead, but two kills by Adrienne DeFuria (Randolph, NJ)paired with two errors by the visitors gave FDU a 23-22 advantage and forced the Hawks to call a timeout. Out of the timeout, Hunter registered back-to-back kills and a block to secure the first set 25-23. FDU jumped out to a huge 12-3 lead in the third and never trailed to force a fourth set. Hunter put together an 8-0 run of its own to get back to within one at 12-11, but the Devils withstood the surge and used back-to-back aces from Kacie Ros (Bridgewater, NJ) to win the third, 25-19. DeFuria posted her third double-double of the season with 17 kills and ten digs to go along with two aces. Jessica Garreffa (Chatham, NJ) notched a season-high 17 digs as FDU’s libero, while Fruscione came up just short of a double-double of her own with nine kills and nine digs.