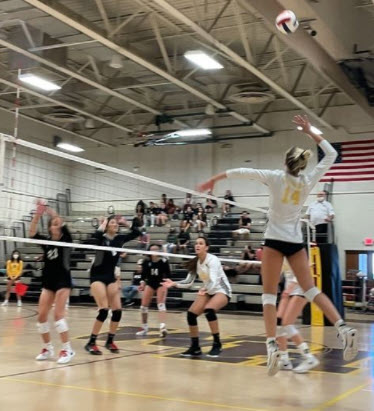 We have all been affected by the pandemic in various different ways over the past 18 months. For NJ volleyball, we have had missed seasons for both club and high school as well as modified seasons that have been shortened and altered as well as delayed due to protocols to keep everyone safe. For Kelly Hector of Watchung Hills, she continues to rise and develop despite the slowdowns, cancellations, and stoppages. We can only imagine the impact she would be having right now if she had the opportunity to play and develop over the last year and a half.

Kelly is a physical specimen, perfectly designed to excel at volleyball. Her tall, sleek frame in addition to her quickness and powerful snap in her swing, leaves her as one of the dominant players in the Skyland conference, as well as in NJ. She broke onto the high school scene as a junior during the short Spring season smashing 67 kills and putting up the blockade 11 times. This season, with two recorded games under her belt, she already has 20 kills in her two best matches of her career.

Watchung Hills always has solid athletic programs but when you compete in the Skyland’s Conference, it’s just hard to rise to the top, especially at volleyball when so many of NJ’s perennial powers dominate the top 20. But there is a new spirit in the Hills with a roster jam packed with club players and the dominant presence of Kelly on the gym floor.

For Kelly, we expect to see her playing at the collegiate level next season. She excels at both indoor and beach and will continue to play after the season for VB Rags. This will get her ready as a high-level collegiate recruit.

We expect WH to continue to improve and gel as we get deeper into the season. Come tournament and state playoff time, watch out for the Warriors along with their gem of a player #14 on the attack and on the block.

Here is our interview with Ms. Hector…

Hi Kelly. Thanks for joining the NJP player interview club. Tell us a bit about yourself?

I currently attend Watchung Hills Regional High School in Warren, NJ.  I live in Watchung with my parents, my older brother who is currently attending the University of Scranton, and Coco, a Bichon Frise.   I’ll be graduating in 2022.

I’ve played Volleyball for 4 years. I actually started the sport a bit late (9th Grade) as I had previously been focused on playing basketball. Once I started playing Volleyball, I was instantly hooked. I dropped Basketball and focused all my effort on Volleyball.

I am 6’0” tall. I play for the VB Rags Club team (both indoor and beach). I have played Right Side, Outside, and Middle, but my favorite position is Outside. My Approach jump is 9’6”.

Tell us about your Warrior teammates. Who do you expect to be this year’s standout players in the Fall?

I have amazing teammates on my high school team. We are truly bonding both on and off the court. I expect Natalia Bienkowski, Jenna Casale, and Madeline Mills to be standout players this fall.

Yes, I do plan on playing in college. I am looking at Rowan University, Fairleigh Dickinson, SUNY Cortland, Stevenson, and several others. I have not decided on a major yet.

Tell us your best memories of your junior volleyball year where you led the Warriors in kills during the shortened Spring season, with 67…

There was one particular game where we were tied, second set, we were at game point, the ball was tight, and I hit the 10-foot line and the team and spectators went crazy.

The Warriors lose 5 of 14 varsity players to graduation leaving a solid core of club players at each position.  How far do you think Watchung Hills can go in the upcoming season?

I think they have developed younger girls, many of them play club, and I believe in 1-3 years, the Warriors will be very successful.

The Skyland Conference is always an outstanding group with solid teams competing each season. It’s been tough for the Warriors, who have not had a winning season since 2014, despite having some really talented teams. This could be the year that it all changes. Does this year feel different for the Warriors?

Yes, because many of the girls on Varsity have played for a club team, our communication on the court is strong, we have amazing chemistry on and off the court. Either way, I’m so happy with our team and excited for this season.

The toughest competitor has always been North Hunterdon High School. They just have so many great players.

I play both. I love both. I have been hand-picked by VB Rags to play on their Beach Elite team this year. I will also be playing indoor volleyball for VB Rags this year on their National Team.

My favorite pro is a Beach player, Veronica Corcoran. I have met her, and she has trained me. She said I have a lot of potential for beach volleyball and to stick with it.