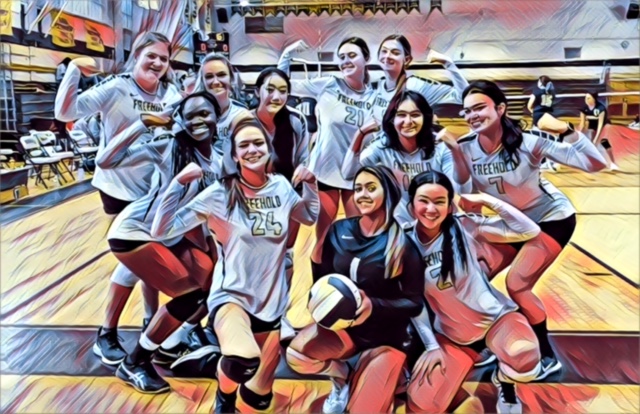 It was a big weekend at NJP. We put out our second team ranking of the season which can be seen here at https://njpowerranking.com/2021/09/26/overall-ranking-2-for-the-nj-girls-high-school-volleyball-fall-season-9-26-21/

We also issued our divisional, conference, section, and group at https://njpowerranking.com/2021/09/26/division-conference-section-and-group-rankings-for-nj-high-school-girls-volleyball-at-9-26-21/

We also launched today our player report card and the NJP Player Rater, overall and by stat category.

The calendar of big games on this week’s schedule can be seen here… https://njpowerranking.com/2021/09/27/the-week-ahead-whats-in-store-for-week-four/

Kinnelon got their sixth win a row as they edged out Morris Catholic in three sets. The last set was 25-23 in favor of the Colts. A huge contribution from Alexa Leitao as she lifted 25 digs in the match. Sophia Gianforte had 15 assists and added 5 aces tonight. Morris Catholic fell to 3-4 but they will get a new injection of talent next week when Fiona North hits the floor after her 30 day waiting period on the transfer rule.

St. John Vianney moved to 10-2 on the season with a straight set win over Raritan. Erin Gretzky with 10 kills and Mackenzie Bloss had 20 assists and 9 digs as well as 2 kills.

Bridgewater Raritan just could not get into their offensive rhythm against Old Bridge as the Knights tally a 2 set win over the Panthers. Leena Tran had 8 kills for the Knights and Malvina Sullivan had 6 kills and 5 big blocks as the GMC triumphed over the Skyland.

Paul VI and Shawnee had a showdown today in the Olympic Conference. The Eagles came in to the match 9-1 and Shawnee entered 5-1. This was a tight match with Shawnee really pressing to get a third set but Paul VI held in for a straight set win 26-24. This will give the Eagles a big advantage in the conference as both teams entered 4-0 in league play. Paul VI will be ready for tomorrows big match at home vs Padua Academy, the #1 ranked team in Delaware.

Great job by Audrey Sousa of Freehold Borough today as they knocked Colts Neck from the unbeaten ranks with a straight set win. Audrey smashed 11 kills, a block, and three digs to help Borough edge the Cougars.

Congrats to Scotch Plains Fanwood as they upset Westfield on the road. It took three sets but SPF players were determined to come away with a victory and get back into the race for the top of the UCC. Melanie Acampora notched 8 kills and 4 blocks while Tori Cirillo raised 13 digs. Chloe Wiedman and Caitlyn Cabrales swatted 6 kills each for the Blue Devils.

Chatham upset Verona today as the Cougars post 71 digs in the three set match. This one went right down to the wire with Chatham squeaking by the Hillbillies 25-23 in the third. The Verona attack, driven by one of the best juniors in the state Patricia Rakova, were frustrated with the strong defense and could not put away their attacks.

The Livingston Lancers got 10 kills from Norah Shaji and 19 assists from Shannie Su as they got passed Newark Academy in two tight sets. The Lancers are now 7-1 and have moved into first place in the SEC-American.

Another big win for the Demarest Norsemen as the #2 team in NJP’s Sunday ranking improved to 7-0 with a win over a very good Pascack Valley squad. Taylor Miller led the way with 6 kills and Olivia Cammalleri had 14 assists. In our most recent ranking, the IHA rating lead was diminished substantially from Rating #1 a week ago. The two teams are getting much closer in the computer analysis. Demarest dominated their home tournament this past weekend against some of NJ’s best teams. Demarest has not lost a set all season and will face Old Tappan on Wednesday.

Another huge performance by Kiannisha Santiago as she belts 14 kills to lead undefeated Hudson Catholic to their seventh straight win. Rachel Hennessey had 22 assists and 5 aces for the Hawks. Drew Leonardis added 9 kills and 2 aces as well.

Burlington County top teams are getting tighter in the race for league honors as Princeton upended WWPS today and Notre Dame notched another win. Sarah Villamil was the star today for the Tigers as she hammered 11 kills and added 8 digs and 2 aces. Princeton pulled away in set two by a margin of 10 points as the Pirates added their 4th loss of the season.

Roxbury improved to 8-1 as they blew past a solid Hunterdon Central team in straight sets. Hard to believe that the Red Devils have fallen to 3-5 on the season. But its not surprising to see the Gaels at 8-1. The lone mar in their record is a loss to Sparta. They play again on 10/8. Mark your calendars.

What a night for Annabelle He of Ridgewood. She smoked 15 kills while adding 15 digs in the Maroons three set win over Ramapo. Ramapo was scrappy and took the second set in extra time 29-27. But Ridgewood just had too much talent today as Grace Kautzman had 21 digs and 4 aces, Ava Pascual had 9 kills and 2 blocks, and Cammi Quirk had 36 assists, 6 aces, and 2 blocks for the winners.

The Kent Place Big 3 had another outstanding performance today as Dragons fended off Union Catholic. It took three sets. The numbers put up by the KP front line was just amazing. Sabrina Skyers had 11 kills, 4 blocks, and 5 digs. Lauren Osuala had 9 kills, 2 blocks, and 2 aces. And Iman Handy posted 11 kills, 2 blocks, 9 digs, and 2 aces. Coupled with 30 assists and 7 digs from Margeaux Morial, Kent Place remains the team to beat in the UCC. They are now the #7 team in NJ. This was the first set they have lost this year after taking the first thirteen.

The NJP Predictor fared well tonight on the monster schedule of games going 52-12. Yearly summary below: