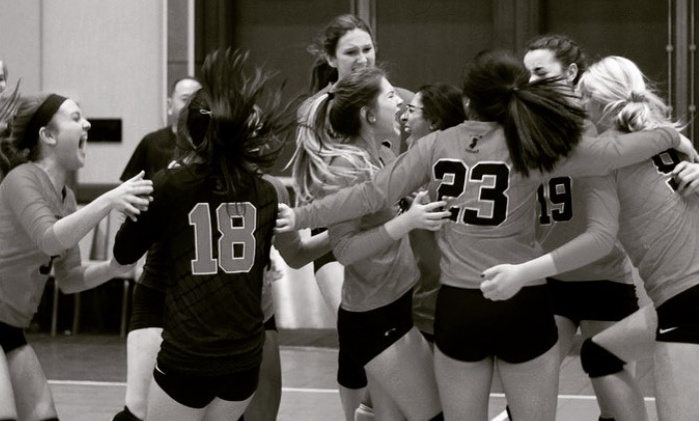 Senior Camryn Stack came into the fall season looking to put the finishing touches on an outstanding high school career at Red Bank Regional. A four-year varsity starter for the Buccaneers, Cam broke out in her sophomore year belting 105 kills and putting up 29 blocks. During the shortened Spring season due to COVID, Cam smacked 57 kills in just 10 matches and also had 14 blocks and 23 aces.

For this current Fall season, Cam has continued her onslaught statistically and has been counted on for her senior leadership. She leads Red Bank Regional in kills and blocks and has worked really well with senior setter Eve Smallwood. Eve uses her middles as the centerpiece of her offensive strategy and Camryn is fine with that. She enjoys exploding from the center of the court on both the attack and on defense.

Cam is athletic and has a solid vertical. She has club experience at Warren Six Pack which has played a big part toward her volleyball success. She has excellent instincts near the net and anticipates opponents attacks well.

As Camryn winds down her high school career, it appears her focus on competitive volleyball will end. But she has created some great memories on and off the court with her teammates that will last a lifetime. And we can say with a high degree of certainty that she will end up playing with friends for the rest of her life.

Here is our interview with Ms. Stack…

Hi Camryn. Thanks for joining the NJP player interview club.

Hi! I’m Camryn Stack and currently am a senior at Red Bank Regional. I live in Little Silver and will be graduating in the class of 2022. I am the middle child of my family with one older sister, one younger brother, and then another step-brother.

I started playing volleyball my freshman year of high school. I had always had an interest in the sport but during basketball season in my eighth grade year of middle school I was known for always blocking everyone shots so people suggested I should try volleyball when I got to high school.

I am 5’9 with a vertical jump of 23.2. I am a middle blocker but have also played right side in the past. I was on Warren Six Pack my sophomore year of high school. My favorite position to play is middle blocker because I like the fast movement skills it requires.

Tell us about your RBR teammates. Who do you expect to be this year’s up and coming and standout players in the Fall?

I am proud of all of my teammates I am surrounded by today. I think Eve Smallwood is definitely going to step up as a setter this season and lead us to success as well as Shani Lynch and her powerful swings. Molly Lonergan has stepped up to be a solid back row libero for our team as well this season.

You lead the Bucs in kills, blocks, and aces in the Spring season. What are your goals for your senior year as you enter your 4th varsity season?

My goal for this season is to have fun and be competitive at the same time. I would like to beat my past years stats and push myself to be one of the best players in my position in the conference.

As of now, I do not plan on playing volleyball competitively in college. I am looking to study communications in college and find a job in public relations.

The Bucs return 10 of their 13 varsity starters and are positioned for a nice turnaround.  How far do you think Red Bank Regional can go in the upcoming season?

I think this season is definitely going to surprise some people. We work hard at practice together as a team and are each individually committed to playing the best to our ability. I believe we could definitely make it into the shore A conference if we continue to practice and play the way we are.

Tell us about your club experience at Warren Six Pack…

I had an overall great experience at Warren Sixpack. I was surrounded my very talented players who enhanced my ability in my position. I also learned a lot about their own skills that I have used to lead myself to more success throughout my season.

An athlete that I personally look up to is Samantha Bricio. I chose to look up to her because she is a very powerful volleyball player and has one of the best serves I have ever seen.

I prefer hard court because obviously it is much easier and I like having that team chemistry on the court.

Cam’s career best game vs Holmdel in April where she posted 12 kills and 3 blocks and 4 aces… https://www.youtube.com/watch?v=5rD5eS6R23A