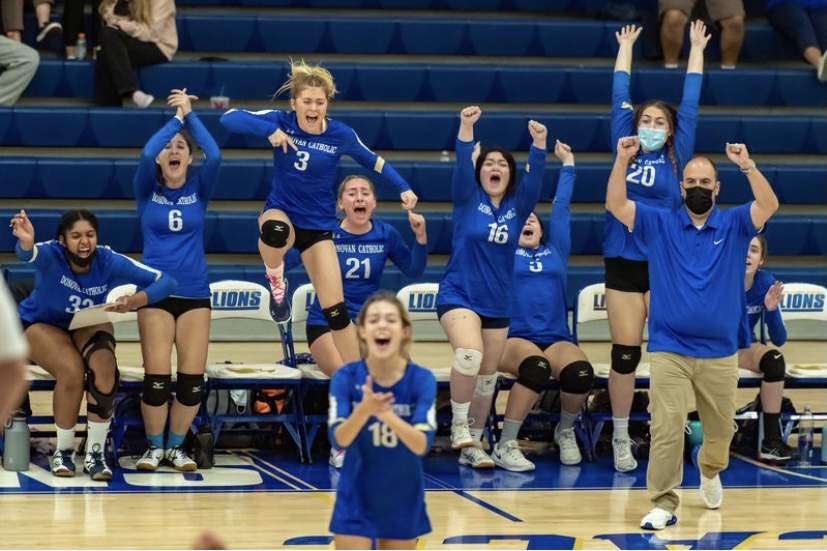 We are just days away from the start of the state tournament and the excitement is building. For those participating, it’s the most special time of the year. The anticipation, the do or die mentality, and the dreams of winning a state title at the tip of the players fingertips.

For some teams, the chances seem must better than others. But this time of year, state playoff games are not math problems to solve. There is no formula or algorithm that insures a specific result. Passion takes over at this point. But we also realize that the difference between winning and losing is often out of our control. The level of competition is heightened and the games are all so competitive. A match could be decided based on a call on a serve that’s in or out by an inch. Or a tip or joust at the net that falls on one side or the other. Or a referee call on a carry or double that feels unjust but probably right on. We need the volleyball God’s on our side. 🙂

So we know there will eventually be just one tournament of champions winner. A small group compared to the thousands of NJ players who participate. But in our opinion, the other players are not losers because they do not win a state championship. The purpose is to play a game that you love with great friends and teammates. You create so many memories that will shape your future and you will learn so much more about life than what the scoreboard indicates. You may not realize this until you are much older. But today’s triumphs and defeats, the relationships with coaches and teammates, the discipline to learn the game, and perseverance to accomplish playing a game at the same time as succeeding academically at school, working that part-time job, doing your house chores, and living life to its fullest shape you as a person and prepare you for life’s bigger challenges. It’s all about the journey. So try to enjoy the ride, no matter what is on the scoreboard.

Kudos to East Brunswick for winning the GMC tournament championship today against JP Stevens. Complete story at this link… https://njpowerranking.com/2021/10/26/east-brunswick-wins-gmc-tournament-championship/

Clearview took Washington Township to three sets today. After losing set one, WT came on strong to win sets 2 and 3 and improve to 20-7. Bryn Bautista has 6 kills and 5 aces, and Olivia Dowling, Isabella Dulude, and Victoria Capone each had 5 kills. Nina Cleary posted 24 assists in the win.

Recognizing such a strong performance today by Jen Howarth of Wayne Valley. The senior slammed 7 kills and 8 aces as the Indians took care of Lakeland in straight sets. We expect Wayne Valley to have a very solid state tourney.

#1 Demarest continued its powerful season and kept its streak alive of no set lost this season as they got by Old Tappan in straight sets. Gianna Galli and Niki Woods with 8 kills for the Norsemen. Nice night for Tay Miller as the sophomore had 6 kills and 2 blocks. Setter Olivia Cammalleri had 22 assists and 4 blocks for NJ’s #1 team.

River Dell (18-3) has had an amazing season thus far and tonight was no different as they blew out Westwood in straight sets. Alicia Idiculla with another top notch performance posting 11 kills for the Hawks. They will be a force in North 1, Group 2 bracket.

The NJP Predictor was nearly flawless tonight on games reported thus far. 95% for Tuesday raising the year accumulated total to 86.6%.

We have more updates to our NJP “Accolades” page which highlights the many great accomplishments of our New Jersey high school volleyball players. Check them out here… https://njpowerranking.com/accolades-nj-girls-high-school/

Many thanks to Sidney de Voogd from JFK-Iselin for sitting down with us today… interview at https://njpowerranking.com/2021/10/26/junior-sidney-de-voogd-is-a-force-for-jfk-iselin-mustangs/

Game predictions for Wednesday at https://njpowerranking.com/2021/10/27/njp-predictor-game-selections-for-wednesday-10-27/

#1 seed Ridge will face #3 seed Hillsborough tomorrow in the Somerset Tournament final. It’s #31 vs #78 in our recent rankings and NJP projects Ridge will win by 4 points per set.

North Hunterdon also takes on a surging Hunterdon Central squad on Wednesday in a rivalry match before states.