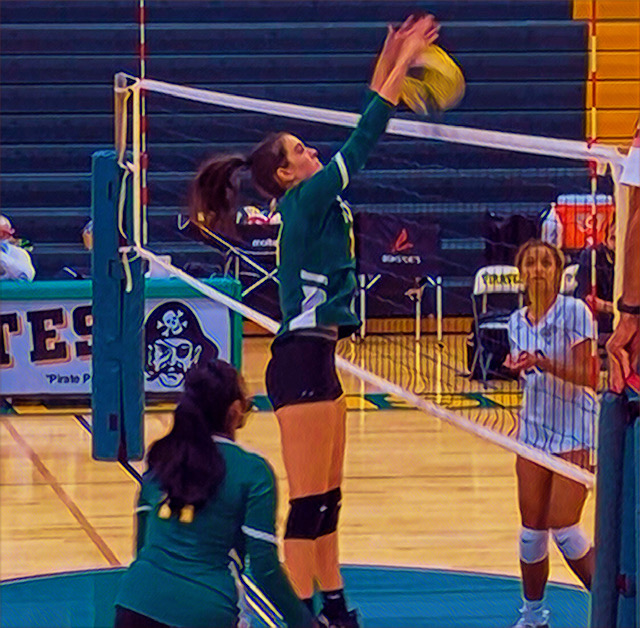 The first game on tap was #1 Demarest putting their undefeated record on the line against red-hot #4 Ridgewood who has turned up the heat in the last half of the season. Demarest had yet to lose a set as they entered today’s finale.

Demarest jumped out to a fast start burning the Maroons and taking the first set 25-19. Ridgewood senior setter Cammi Quirk knew the weight of the world was on her shoulders to get Ridgewood back into the match and she did just that. “After losing the first set, we knew we had to step it up and that’s exactly what we did! said Quirk. The Maroons anchored in and played their best volleyball of the year in set 2, handing the Lady Norsemen their first set loss of the season 25-13. Quirk targeted Annabelle He and Ava Pascual and they soon took over the game tempo and garnered the momentum they needed going into the third and deciding set.

Annabelle He just knocked the lights out in the Championship. She posted 26 kills for the match and fueled the attack down the stretch as the Maroons took the third set 25-23. Ava Pascual had 12 kills and 2 blocks and Cammi had a career high 41 assists.

Quirk told us “It was awesome to be apart of such a good game from both ends! It was so exciting to win a county championship against one of the best teams in the state.”

Demarest has represented NJ’s best all season long, having not dropped a set this Fall. They now prepare to start their state playoff run coming off their first loss. It will be interesting to see how this talented team responds to the adversity. Our guess is, it will be with a vengeance.

#6 Mendham took on #12 Roxbury for the Morris County Championship tonight. We knew this was going to be a close, three set match and it certainly was a back and forth affair. Roxbury fended off a late surge from Mendham and won the third set going away to take home the crown.

The critical point in the match was Roxbury fending off a set point in the first game and then winning the last three points of the set to win 26-24.

Victoria Latino was stellar for the Gaels all night long. She told us “Tonight, I couldn’t have been more proud of my teammates. We really showed that we wanted it.”

Latino continued “We played with heart, passion, dedication, ambition, and most of all we had fun tonight. It’s been a long time since Roxbury has won something this big in volleyball. It’s a great feeling. It was a great match against such a talented team.”

Victoria gave Mendham a lot of credit and knows the team well from their NJAC match-ups. “They put up a tough fight, but our team over came that challenge. I would like to shout out our amazing setter Lorie Horta and our insane libero Bella Chan and our awesome pin hitter Sammy Olander, they had an amazing night!”

We think Latino summed it all up with this statement. “Tonight we played not just as a team, but as a family.”

More rankings and ratings coming tomorrow… Have a great weekend!!!