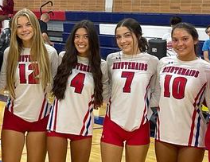 The Williamstown Braves, who came off a very successful tournament weekend, fell for the first time in over a year as Washington Township asserted themselves as a top 10 candidate in NJ by defeating the Braves 2-1 Monday. The combination of Bryn Batista and Nina Cleary was the difference in the first match of the year for Dubtown and the second straight win for the Minutewomen. Township moved to the Tri-County after winning the Olympic last season.

Today, Bautista had 16 kills and Cleary had 24 assists to drive the victory. What is even more impressive is both players are just juniors. “It was a surreal experience playing with a big crowd and securing a victory against a powerful opponent!” said Nina Cleary, WT’s standout setter. “I appreciate the level of competition Williamstown brings. I am impressed and proud that my team was able to come together under pressure even though we were the underdogs.”

Williamstown is expected to have just as as good a team as last season, returning many of their top performers after going undefeated at 37-0. So let’s not count the Braves out after their first game of the season. But what an amazing accomplishment for Washington Township and Head Coach Jeff Hood to have a statement game this early in the season.

Township received a full-team effort with many players making contributions to the win. In addition to the Cleary/Bautista show, Bella Dulude had 5 kills and 5 blocks, Tori Capone had 5 kills, and Jess D’Orazio and Makenna Hagerty excelled on the back row.

Bryn Bautista also shared “It took our best effort to beat the undefeated Braves! We gave it our all and I wouldn’t want to experience such a moment with anyone else other than my team.”

The Braves dug in with 50 digs but could not fend off the potent Township attack. Despite Dajah Williams posting 13 kills and 10 digs, Julia Schwab having 8 kills and 16 digs, Joanna Andrews putting up 29 helpers, Melissa Anacious having 6 kills and a block, and Mia Owens posting 14 digs, it wasn’t enough to prevail in their opener.

These teams have a rematch on 10/4 at Williamstown. Should be a doozie.