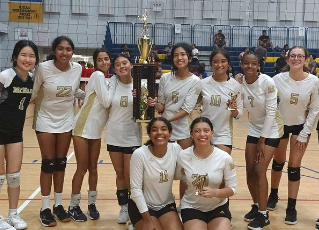 What an amazing “First Monday” for the NJ Girls high school volleyball season. Lots going on tonight, major upsets, signature wins, and outstanding performances… so lets get to it… we will continue to update the blog as the night continues so stay tuned and check back often…

#2 Williamstown falls in their opener to Washington Township. Complete story here at https://njpowerranking.com/2022/09/12/cleary-and-bautista-combine-forces-to-deal-williamstown-first-loss-in-over-a-year/

What an amazing Herculean effort by Cammi Quirk tonight. The Ridgewood setter was all over the court putting up some unbelievable numbers in their match against Northern Highlands. Quirk’s effort fell just short in three set match loss to the Highlanders. Quirk contributed 10 kills, 15 digs, 17 assists, and 6 aces for the Maroons but it wasn’t enough to prevent Ridgewood from falling to 0-2. Northern Highlands evened up their record at 1-1 thanks to some great performances of their own. Grace Khowaylo smashed 11 kills and had 14 digs and a block for the winners. Sophomore Delia van der Heide is ready to break out in her second year at varsity and added 5 kills, 2 digs, 3 aces, and 11 service points. Senior setter Bella O’Callaghan had 22 assists and masterfully orchestrated the NH offense spreading the attack perfectly and taking advantage of Anna Bryan Jones (5 kills), Gianna Cabrera (3 kills) and Chloe Anselmi (2 kills). Highlands got off to a rough start dropping a three set match to PCTI. We expect them to have a great season moving forward and this win was a great sign.

McNair defeated Hudson Catholic today for the first time since 2014. McNair is now 4-0. You sense a bit of change coming in Hudson County as the perennial power Hudson Catholic Hawks may finally be in a bit of rebuild after losing such a wealth of talent to graduation last season. McNair was powered by 5 kills from Samantha Dinson as well as 4 kills and 3 blocks from Beyonce Castro. Freshman Jakiya Carter has been welcomed with opened arms this season and has had an awesome start to her career for McNair. Hudson Catholic dropped to 1-1.

Staying in Hudson County, Hoboken knocked off Ferris today, driven by the Walia-Peters sisters, Madison and Morgan. Madison posted 13 assists, a kill, and 2 aces while Morgan had 6 kills, 9 digs, and an ace. Junior Kayla Zegarra had an awesome match as well contributing 3 kills, 10 digs, and 4 aces. Stella Jacey had 9 digs and 2 aces for the winners.

Fair Lawn has looked so strong so far this season and had another big win today against Wayne Valley. Wayne Valley was coming off a huge win over Ridgewood and took the first set from the Cutters today, but it was all downhill after that. Fair Lawn rallied to take the last two sets as Ash Kingsley posted 17 kills, a block, 3 aces, and 7 digs. A great performance by the 6′ senior. Gabriela Imburgia added 7 kills and 2 aces in the win.

Very surprisingly, Demarest is off to an 0-2 start as Pascack Valley dumps the Norsewomen in three sets. The Big North can be brutal even for the best teams. It was the Taylor Grady show today with TG posting 6 kills, 32 assists, and a dig. The 4-year varsity starter was in the groove today and got plenty of help from Grace Misha (8 kills), Jillian Feeley (7 kills), Mia Hachadourian (6 kills, 6 aces), and Noelle Solimano (4 kills, 6 aces). Sabrina Arcilla was her normal acrobatic self on the back line leading both teams with 9 digs.

Like a heavyweight prize fight, the match-up between MKA’s Samiyah Abdur Rahim and MSDA’s Bridget Lonergan carries a heavy billing. The only thing missing was the pre-fight weigh-in, which would have been totally inappropriate in this case. But these two warriors locked horns at the MKA gym today and at least the first round has gone to Abdur Rahim. Samiyah had 16 kills, 7 aces, and 15 digs in a dramatic three set win. Lonergan had 15 kills, 4 blocks, and 5 digs in a losing effort. MKA’s serving expertise was the difference in this one as they out-aced the Lions 16-3. Freshman Mahala Weintraub had 18 assists, 2 kills, and 8 digs, Hailey Fouche posted 5 kills and 6 digs, and Amara Lerner had 10 digs and 2 aces for the Cougars. MKA new head coach Kennedy Robinson remains unbeaten thus far in her first season.

Cayley Morrison and Aries Fontaine put on a show today as Elizabeth handed Kent Place its second consecutive loss of the season. Fontaine posted 15 kills, a block, and an ace and Morrison had 10 kills, 3 aces, and 5 big blocks to pace Elizabeth to its first win of the season in three sets. Jadyn Negron had 20 assists, 5 aces, 2 kills and 5 digs for the winners. Lauren Osuala was outstanding for the Dragons and posted 12 kills, 7 digs, and 4 aces in a losing cause.

Immaculate Heart with another dominant performance today with a straight set win over Hackensack. The Comets were limited to just 13 points over two sets. The Blue Eagles rolled twelve players in the win. 15 aces fro IHA including 5 each from Bryanna Saenz and Eve Roman.

Nice team effort from Colts Neck as they move to 2-0 with a win over previously unbeaten Freehold Borough. Sophia Koval with 21 assists, Maddy McSorley with 15 digs, and Brooke Lombardo and Alex Foley combining for 13 kills. Savannah Butz added 4 kills and 4 blocks for the Cougars.

You have to love the season Dayton is putting together so far as they put up another dominating win, this time over Roselle Park. Sam Janker with another 9 kills as the Bulldogs move to 4-1.

Rahway surprised Union today powered by an 8 block performance by Janayah Diggs. Rahway smacked back 17 blocks on the day to take the match in three sets. Denicy Mota had 4 blocks and Charlize Rodriguez added 3 blocks and 2 aces. Rahway also was fire at the service line with Ashley Pinedo-Herrera scorching 7 aces and Julissa Carrero adding 5. Rahway will face Summit and Linden next this week and we will see if the Indians can sustain and assert themselves in the top of the UCC-Mountain mix.

A great effort by Kiki Afolabi today as Newark Academy evened their record at 1-1 with a win at Bloomfield in 3 sets. Afolabi had 6 kills and 9 blocks in the winning effort. Its been a slower than expected start for NA after their loss to Verona Saturday but they will look to build momentum after todays win.

Governor Livingston stormed past SPF in straight sets today. 9 aces from Eva Sottosanti set the tone in the win.

Ramsey is now 2-0 as they locked horns with Pascack Hills tonight. Hills took the first set 25-22 and the Rams took the last two sets 25-22. Great volleyball with back and forth action and the winner not determined until the last few points. Two strong wins for new head coach Jessica Waldeck but River Dell and Pascack Valley loom on the schedule later this week.

St. Benedict’s was ranked #268 in our pre-season analysis. Today they bounced Mount St. Mary in three sets to move to 3-0 on the young season. Great start for a team that finished 1-9 last season.

Princeton is looking so strong so far this season with the addition of freshman Naomi Lygas. Lygas had 8 kills and 3 aces in todays convincing win over Hopewell Valley. The Tigers already have Sarah Villamil, Lois Matsukawa, and Annie Zhao to power their success but the addition of Lygas and freshman newcomers Charlotte Woods and Kaelin Bobetich have proven to be a winning combination.

St. John Vianney received 27 kills from the duo of Ashley Sofikanich and Genevieve Millett as the skipped past previously unbeaten Raritan in three sets to go 2-0. Mikaela Hubbard posted 36 assists and Stephanie Buttons had 15 digs for the Lancers.

Who is the latest players to be featured in the NJP “Faces of NJ Volleyball” series? Tune in at https://njpowerranking.com/njp-faces-of-2022/