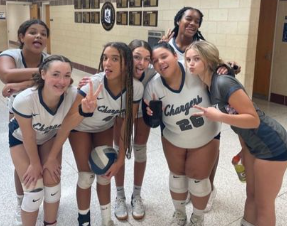 As usual we will be updating our blog as the night progresses, so feel free to check back for new content…

Monroe opened the season at 3-0 and looked impressive in their first few games. This week, they ran into the the best of the best in the GMC, losing to East Brunswick on Monday and today feeling the wrath of the Old Bridge Knights. Both EB and OB reman undefeated at this point and Monroe will have to muster some late season strength and strategy to get back in the mix the next time they face both of the powers.

Saddle Brook took it to Bergen Charter today improving to 4-2 on the season. Francesca Accetta had 7 kills and Madelyn Faber added 5 kills and a block to set the tone for the Falcons. Abigail DePeri had a gem of game posting 10 digs, 4 assists, 2 aces, a kill and a whopping 16 service points for the winners.

Glen Rock improved to 4-3 inspired by a big defensive showing from Audrey Kim who lifted 32 digs in the 2-setter. Polina Lipsits had 8 kills, 4 aces, and a block for the Panthers. Hawthorne Christian fell to 3-2 but still holds a percentage point lead over Glen Rock in the Colonial league standings of the NJIC.

Harrison evened its record at 2-2 with a solid straight set win over Weehawken. Xiomara Tasca reeled off 9 aces for the Blue Tide and Julia Soares landed 4 kills. Harrison has a tough climb in front of them as St. Mary’s, Rutherford, and Secaucus have all got off to hot starts in the NJIC National.

Brynn McCurry, Payton Simpson, and Tara Keller handled the attack and Haley Maher led the defense with 13 digs to lift Sparta over Roxbury in NJAC action. Rox continues to struggle without Victoria Latino in the lineup. Sparta is now 8-0.

Colts Neck is now 6-0 and rolled 16 players on their roster as they dropped Long Branch is straight sets. Brook Lombardo mashed 7 kills and Sophia Koval and Maddy McSorley had 3 aces each and Savannah Butz and Alex Foley had 4 kills each for the Cougars.

Livingston is now 8-0 after an afternoon taming of Newark Academy. NA has fallen just short in more than a few matches this season and at 3-4 will likely have a much rougher ride in their sectional if they turn things around. NJP picked Newark Academy to win the Non-Public B championship this Fall and we are certainly standing by that prediction. Livingston continues to bulldoze its way through all of the SEC talent group. The Lancers are looking to continue climbing up from the NJP #15 ranking.

Whenever Lenape and Shawnee get together, it’s usually a “spirited” event and rivalry. Shawnee got by the three sets with a win depite being outscored on the night through 3 sets. Shawnee improved to 4-3 and Lenape endured their first loss and dropped to 4-1.

Barringer and East Orange faced off today in an SEC battle of division rivals. Both teams entered with just one loss on the season. East Orange rose to the occasion and edged the Bears in straight sets. EO is now 5-1 and are having an awesome thus far in the SEC-Colonial.

Motown improves to 4-1 after taking down Chatham in straight sets.

Kingsway improved to 3-2 with a big win over Gloucester Catholic in the Tri-County.

Mendham picks up their second win of the season by defeating a very tough Mt. Olive team in three sets. Mendham has had a rocky start and rises to 2-4. The Minutemaids moved over to North 2, Group 3 this season. That means they now have star teams like North Hunterdon, Summit, and SPF in their group. We expect them to be in a good position to to at least get to the semi’s.

Big battle in the NJIC-Patriot today as Cresskill who entered the match with a perfect 5-0 record took on Waldwick who entered with just one loss. Cresskill had a dominant first set, winning 25-15, but Waldwick scratched and clawed back into the match winning the second set 25-23 and then taking a 26-24 OT win in the third to secure the victory. Great effort by both teams who continue their excellent seasons so far.

Paramus squeaked by Lodi Immaculate by a razor’s edge in a three set thriller. Tiana Holeviczki squashed 11 kills and 5 aces for the Spartans and Isabella Bido put back 7 blocks in the win. Paramus took the third set 27-25 to secure the narrow win.

Another huge night for Riley Sobel as she posts 12 kills and 12 digs in a three set win for Bergen Tech over a stubborn Leonia squad. BT is now 7-0 on the season. Kaitlyn Acevedo had 19 of the 70 digs posted by the Knights as the continue to put on a defensive show and earn their role in the NJP top 10.

Madison was a monster on the service line today slamming 16 aces and defeating Par Hills in straight sets. Izzy Hunter had 5 kills and 6 aces and Sydney Bruns posted 15 assists and 5 aces for the Dodgers who are now 7-1.

Nice job by Seneca today as they need three sets to get by a spirited Camden high school squad to improve to 5-1 overall on the season. Calissa Araujo with 10 big aces, 3 blocks, and 7 kills while Grace Yaeger had 6 aces for the Golden Eagles.

Princeton keeps rolling and is now 6-0 after disposing of Northern Burlington in straight sets. Sarah Villamil with 12 kills, Lois Matsukawa with 18 assists and a great night for Kaelin Bobetich who posted 5 kills and 2 aces. If you look at the Tigers schedule, you will see they have added some out of conference games that will better prepare them for states with Lenape, Montgomery, and Washington Township on the grid in October.

Check out our new “NJP Faces of 2022” as we surprise a few more members of the NJ high school community with our hero honor at https://njpowerranking.com/njp-faces-of-2022/

Interesting new article reveals some unique game statistics so far for the season as well as some fun at https://njpowerranking.com/2022/09/20/game-analytics-did-you-know/