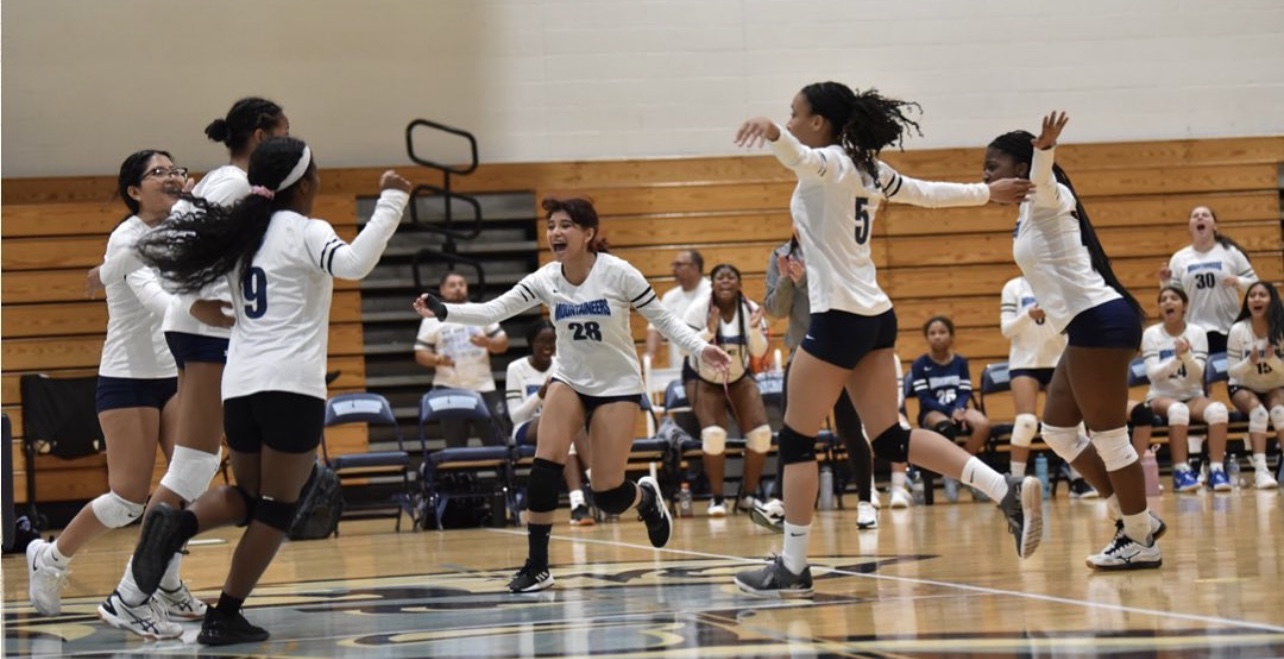 Some big matches on the slate today that will bring better definition to seedings and top 20 rankings. The winds of change are in the air. There is always that point in the year where you stop and see how fast the season is progressing and that there may be less games ahead of us than what is behind us. We are there as we face county tournaments starting soon as well as the state cutoff looming on October 22nd. Still plenty of volleyball left as we lead up to state tournament conclusions in November.

Immaculate Heart Academy with a convincing display of power and talent today as they hold Bogota to just 27 overall points over 2 sets. IHA was at another level today with Brookelyn Talmadge strong on the attack with 14 kills, Kalena Stavish running the show at setter with 23 assists, and Abby Romero guarding the defensive zone with 19 digs. Eve Roman got immersed in the team effort providing 6 kills, 3 aces, and 7 digs, and Grace Coughlin lifted 12 and had 2 aces for the Blue Eagles. Khalia Content controlled the middle and posted 4 big blocks to turn away the Bogota offensive charge. IHA was in overdrive today in what we expected to be a tight 2 set or even three set match of Big North powers. IHA is staking their claim to the top spot in NJ and it clearly looks like theirs after today’s show of strength. With the Tournament of Champions now gone from the NJ landscape, Bogota may not get another chance to face IHA as the Buccaneers focus on a Group 1 Championship that starts later this month.

Township makes it a clean sweep of the defending champion Williamstown Braves in a sparkling match that went three sets. Williamstown took the first set 27-25 on their home floor but Washington Township battled back to win set 2 by the same score. The third set went down to the wire but it was undefeated Washington Township coming away with another win and is now 9-0. This was a great example of both teams putting on a show and showing off their high talent levels to the NJ fan community. There were so many stellar performances today on both sides of the net. For Township, it was Brynn Batista (12 kills, 2 aces) and Nina Cleary (23 assists, 5 aces) once again connecting on the Minutewoman attack with Bella Dulude notching 4 blocks and 6 kills. For Williamstown, Dajah Williams led all players with 16 kills and Melissa Anacious had 10 along with 6 big blocks. Joanna Andrews had 33 assists and Mia Owens led both squads with 17 digs. There is still a ton of volleyball remaining for both squads this season as both teams have at least 10 regular season games left on their schedules. But WT has solidified its chances to take home the Tri-County regular season title with this victory. Both have HUGE quad matches this Saturday with Washington Township facing #22 Colts Neck (11-0), #27 Pinelands (9-1), and #8 Southern (11-0). Williamstown will face #16 North Hunterdon (8-4), #20 Hunterdon Central (8-2), and #9 Westfield (10-0).

Sparta remained unbeaten at 11-0 after disposing of Morris Knolls in straight sets. The Spartans left no doubt early as they smashed out of the gate in the first set and never looked back, ripping a 25-3 victory in set one, powered by the serving expertise of both Peyton Simpson and Aralyn Saulys. Brynn McCurry was flawless on the attack, smacking 12 kills and an ace. Saulys and Arianna Puleo combined for 20 assists. Tara Keller had 4 kills for the Spartans.

In a premier matchup of top teams in the BCSL, Princeton outlasted Notre Dame in a three set thriller. It was more rejuvenation from the Princeton youth movement that inspired tonights win as 3 freshman made major contributions: Noami Lygas ripped 8 kills, 8 digs and 2 blocks, Kaelin Bobetich added 4 kills, 2 blocks, and 2 aces, and Charlotte Woods had 8 digs and 3 aces. Impressive numbers for all three first year players. Senior Sara Villamil posted 9 kills and sophomore setter Lois Matsukawa had 25 assists as well as 10 digs to power the win. Princeton is now 11-0. Cassady Smith was stellar for the Irish in a losing cause with 9 kills, 9 digs, a block and 2 aces.

Montville got back on track today, avenging an earlier season loss to Chatham, and improving to 10-3 overall on the season. Last week ended with 2 uncharacteristic losses for the Mustangs as they dropped league games to Roxbury and West Morris. Today was a powerful performance as they put up set margins of 10 and 15. Michaela Voit was in charge for the Mustangs as she posted 17 assists, slammed 4 aces, and got one kill and block. Cassandra Chuahan and Katherine Gorski combined for 19 kills and Gorski put back 3 blocks while Adrianna Pressimone added 9 digs. Very strong effort today by Montville. Chatham fell back to 5-4.

Cherokee dominated play over Egg Harbor today in an inter-league matchup of Olympic vs CAL. Senior and 4-year varsity player Brook O’Prandy took over and gained the spotlight with 8 kills and 8 aces. Don’t let the Cherokee record fool you. Five of their losses are to teams ranked in the top 10 in NJ. They limited EH to just 18 points over two sets. And O’Prandy is a star. Super athletic and a force to reckon with.

Olivia Benson and Jill Becker had 5 kills each, Molly Quigley-Sanborn posted 13 assists, and Eva Pollack lifted 10 digs as Pinelands took care of business today with a straight set win over Jackson Liberty. Pinelands improved to 9-1 and is set for this weekends quad where they will face three currently undefeated teams in Washington Township, Colts Neck, and Southern. The Wildcats hope to make their mark and solidify a top 20 ranking by Sunday’s update but the math may indicate 3 losses could be on the horizon.

Toms River South defeated Brick Township in a big Shore Conference match this evening with a 2-0 win on their home turf. Jordan Motyka had 7 kills, 3 digs, and 3 aces, Cameron McEwan had 13 digs, and Jordyn Lynch put up 13 assists and 5 digs. TRS is now 10-3 and Brick Twp is 9-4. TR South played fiercely to earn a come back win against the Dragons team who had originally dealt them their 1st loss of the season. It was a well earned win for the Lady Indians.

WWPS surprised Monroe today as Sibana Gonzalez and Maria Theruviparambil showed off their superstar capabilities as they combine for 31 kills, 2 blocks and 12 digs. Just a stellar performance and a BCSL win over the GMC.

A super tight match today between Point Pleasant Beach and Trinity Hall. Trinity survived the first set and escaped with a 25-23 win. The second set was even tighter as extra time was needed to settle the score. PPB scored 30 but Trinity ended with 32 points in of the higher scoring sets of the season. Trinity Hall improved to 5-2.

The latest updated ranking and ratings as of 10/2: https://njpowerranking.com/2022/10/02/updated-rating-and-ranking-for-nj-high-school-girls-volleyball-10-2-22/

Updated analytical standings for each division and conference: https://njpowerranking.com/2022/10/02/analytical-standings-for-the-nj-girls-hs-volleyball-season-as-of-10-2/

Game Table and results grid for easy ingestion of scores and matches: https://njpowerranking.com/2022/10/02/game-table-update-10-2-22/

This is the usual time for county tournaments. Please send us your county seeds and schedules when received! njpowerranking@gmail.com or DM us through social channels…

The NJP Predictor launched on Friday. The algorithm was 44-3 at picking winners. That’s 93.6% accuracy. Congrats to Roxbury, Rancocas Valley and Mountain Lakes who turned the table on the math! Awesome job! https://njpowerranking.com/2022/09/29/njp-predictor-9-30/