Liam Maxwell Making a Rukkus in the VLA 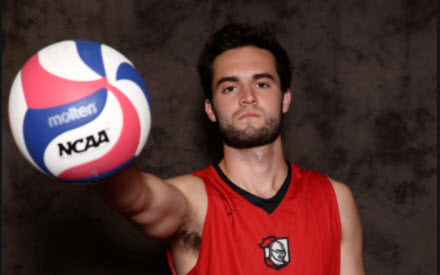 Liam Maxwell, former Southern Ram and Belmont Abbey Crusader is continuing his illustrious volleyball career in the VLA. Liam made his professional indoor volleyball debut this weekend in Volleyball League of America (VLA) in Phoenix., Arizona. He signed with “Rukkus” based out of Southern California.

The roster is loaded with big names in the volleyball world such as Micheal Wexter and Kevin Vaz of Pepperdine, Jeffrey Schmitz of Ball State, Garret Komisarek of Hawaii and Kyle Gramit of George Mason.

We caught up with Liam Monday and asked him about the VLA. “It’s really exciting to be a part of the VLA, you can tell it’s growing and getting the attention of volleyball heads across the country, the future is bright for Team Rukkus and VLA as a whole”.

He added “TeamX was super scrappy so it took every shot in my toolkit to get kills against them. Credit to my great setter Jeff Schmitz, former UC Irvine setter, who kept giving me perfect balls to swing at”.

“What drew me to Rukkus was how incredible the other players on the roster were, accomplished alumni’s from Pepperdine, Hawaii, Stanford, etc. and the opportunity to play alongside those guys can only make me better”, Liam said.

VLA broadcasts all games on loads to youtube for viewing for free. Here is match #6 where Liam was MVP…

The First Point Volleyball Foundation is a great resource regarding the growth of mens volleyball in the United States. Visit them at http://firstpointvolleyball.com/

Congrats to Liam for again blazing the path for NJ volleyball player achievement.