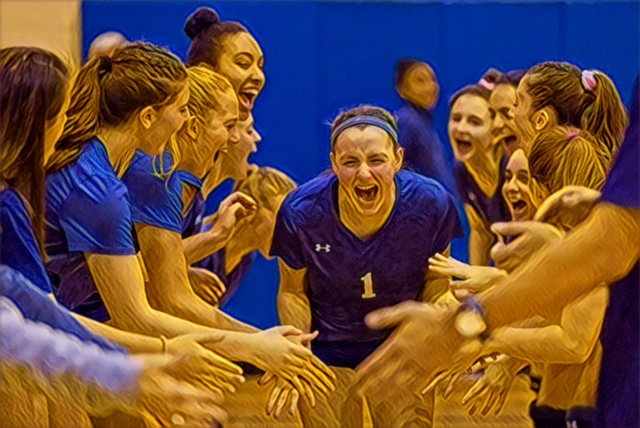 We hope you will take advantage of, and contribute to, our school livestream link page at this link… https://njpowerranking.com/nj-high-school-volleyball-live-stream-links/ If your school has a link, and you don’t see your logo on the list, please send us your link so we can add it for our entire NJ volleyball community enjoyment.

Paige Anania put on a show in East Brunswick today as the Bears downed Old Bridge in straight sets. Paige slammed 12 kills and added 7 aces making up 40% of EB’s points on the day. It was the Bear’s opening game while Old Bridge dropped to 0-2. Paige recently sat down with NJP and you can view her interview here… https://njpowerranking.com/2021/09/06/east-brunswicks-paige-anania-ready-to-lead-bears-in-senior-year/

Bogota, still wincing from their opening day loss to #1 IHA, showed no mercy on Palisades Park limiting them to just 12 points in the match. Ashanna Caviness was outstanding yesterday as well as and today adding 8 more kills and 4 aces to her stat line. Gyanna Hernandez was crazy good on the service line smoking 10 aces for the match.

Westfield looks to be returning to this Spring’s form as they knocked off both SPF and Union in their first two games. Taylor Addis and Caitlin Cabreles have been powering the attack with the “Three C’s” continuing their outstanding play… Chloe Wiedman, Chelsea Duan, and Chloe Kreusser. Monday will be the big test for the Blue Devils as they take on Kent Place at home. One of the games of the day for sure.

Barnagat moved to 2-1 with a convincing win over Lacey. Barnegat has rebounded with 2 straight wins after an opening day loss. Awesome performance by Lacey senior Lochlyn Martin who raised 15 digs during the match!

Vernon downed Kinnelon today. Vernon is looking better than expected an is now 2-0. Kinnelon looks to be less powerful than expected at 0-2 but the season is young. We will get a good gauge on Vernon when they face Jefferson on 9/22. Kinnelon signaled a bit that it may be a rebuilding year by their schedule strength targets but we will wait and see.

Another great game by Steph Mizeski as Lyndhurst downed Teaneck today to advance to 2-0 on the young season. Steph slammed another 10 kills while adding 2 aces and 4 digs. Stephanie now has 21 kills in 2 games.

Bayonne is off to a great start at 2-0, winning today over Hudson County rival Kearny in straight sets. Pat Longo, the Bees long-time Coach, is only one of three Hudson County coaches with over 500 wins in girl’s volleyball. She shattered that mark in September 2019 and is well on her way to 600.

Hats off to Linden as they started 2-0 and hung tough against JP Stevens today, losing a three set match. Linden has had some stellar performances, especially from junior middle Esther Babatunde who has already posted 30 kills in three contests. She also has 11 blocks in those three games. Sara Buczynski had an awesome game today as well with 6 kills and 6 blocks which kept the Tigers close. JP Stevens is now 2-0 and get great contributions from Joyce Chen with 7 kills and 14 digs and Laurel Sarkaria with 24 assists, 4 aces, and 4 kills. We know Coach Anthony White will keep this squad close to the top of the GMC.

Union City powered past Memorial with Nathaly Flores garnering 11 kills and 4 aces. Scarlett Torres has settled in at setter and 4 Soaring Eagles had 2 kills each.

Demarest opened their season with a huge win over Big North rival Wayne Valley. One of NJ’s best athletes Niki Wood returned to volleyball floor after missing the Spring season and had 12 big kills and 3 digs. Taylor Miller, Grecthen Haray, and Gianna Galli showed off their dominant net attack and Olivia Cammalleri had 22 assists, 4 aces and 5 digs for NJ’s #2 team. Wayne Valley missed Julianna Lavner’s excellence but Jen Howarth and Emily Pogorelec had 5 kills each in the loss.

Tomorrow is 9/11. For all of our high school players, it was before your time. But it was an amazing time in our Country’s history. It was a time of anguish and heartache, but it was also a time of resilience and togetherness. It was a single catastrophic event that brought us all together. It was a time of helping and healing and the most united we have ever felt as a country. And it carried many life lessons for student athletes as well. That no matter how dim things look, we can survive and persevere. We are stronger together, than we are as individuals. And helping our brothers and sisters in need, was just the right thing to do…

So we will ask a favor of you. A history lesson so to speak. Take 5 minutes, close your eyes, and take a listen to the words and passion in this video below. Although this song was written almost a year before the 9/11 attack, about Asbury Park in NJ, it has been associated with the September 11 tragedy when Bruce Springsteen sang this version shown for a “Tribute to Heroes” benefit on 9/20/2001.

Close your eyes and listen to the words….