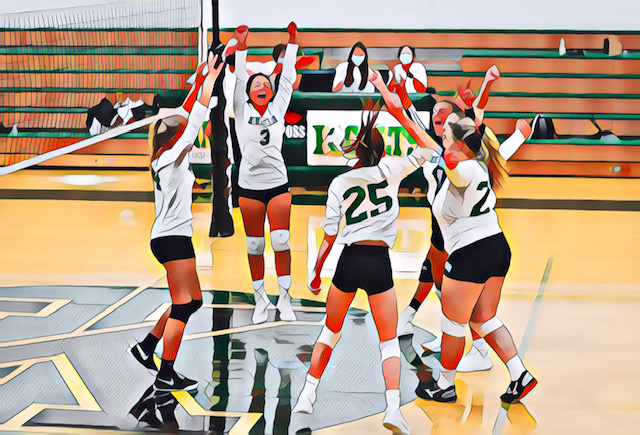 As we received our game scores tonight, we certainly had some revelations… let’s jump right in to the girls high school volleyball schedule!!

Revelation #1: Demarest may be the best team in NJ. The computer algorithm has had them behind IHA, like every other team in NJ, all season long. Like IHA, when they play one of the top teams, the score is not close. Today against #5 River Dell, it was another dominant showing from the Norsemen. They held the Hawks to just 11 points in game two. 6’1″ sophomore Taylor Miller has been a standout all season long and is a best in class opposite. Taylor had the best game of her career with 9 kills. At 11-0, we just can’t wait to see Demarest eventually match up with IHA.

Revelation 2: Williamstown just keeps getting better and better as the season progresses and we have been so impressed by 6’1′ sophomore opposite Dajah Williams. She racked up 14 kills tonight in just two sets and her kill per set numbers have been rising the deeper we get into the season. Junior Melissa Anacious has been very impressive as well. Melissa slammed 10 kills today and added a block to her team leading total.

Revelation 3: As we enter October and are just 13 days from the state playoff cutoff on 10/19, in our minds, the Sectional Champs candidates and TOC participants have clear favorites identified:

The non-public schools have seen Kent Place emerge this season as a threat and certainly Hudson Catholic will advance far into the grid. But from what we have seen from IHA thus far, they remain a clear favorite.

North 1 has some amazing teams but the dominance of Demarest makes them a clear choice. Others in this sectionals include Bogota, Ridgewood, River Dell, Northern Highlands, Roxbury, Sparta, Old Tappan, Wayne Valley, Pascack Valley Livingston and a charging Clifton team. But Demarest has been so strong, we can’t see them falling.

North 2 has a clear favorite in North Hunterdon. We consider this the weakest of the 5 sectionals. Ridge and Union City are top 25 threats and Rutherford is hard charging but probably not at the Lions caliber.

Central is interesting. East Brunswick has been lights out so far and has not lost a set. But Mendham is always a major contender that peaks at playoff time. These two teams appear far from the rest. Princeton has been excellent as of late as has Monroe. Maybe Kate Stoughton can lead Brick Memorial to the top? For now, we think the Bears will be there, with the Minutemaids on the threshold.

Gloucester Tech continues to show signs of being a breakthrough team this year. Shawnee, Washington Township, TRE, TRN, Cherry Hill East, and Southern have all shown signs that they are very good, but maybe not at the skill level of GT and certainly not Williamstown. This might be Dubtown’s year…

We will reevaluate next week as we get closer to the cutoff.

Madison came into the night at 7-1 and was climbing the ranks as one of the top NJAC teams. The ease that Mendham slammed through them is a testament to just how good the Minutemaids are… Madison scored just 15 points over two sets. Annibelle Ernst had 7 kills and a block and Poppy Skjonnemand had 6 kills for Mendham. Sara Wilcock had 10 assists, 4 aces, and 3 kills for the winners. 5 wins in a row now for Mendham.

Congrats to Toms River North senior Caitlin Beahm for collecting her 500th dig today against TRE. Despite losing a riveting three set match, TRN is still 8-2 and ready to excel in the shore tournament. TRE improved to 10-2 powered by 29 assists by Meg Currie and 11 kills from Shannon Donaway.

Randolph put up a great fight tonight, but fell just short in their three set match against Roxbury. Rox pulled away in the third, taking the final set 25-14. The Gaels are now 12-1.

Spirited performance by Pinelands as they get within 2 points of Barnegat in a knock down, drag-out three set match. Pinelands drops to 9-3 and Barnegat improves to 11-5.

Sienna Volpe had 6 kills and 6 aces for Mount Olive as they cruised past Hanover Park in straight sets. The Marauders had 4 kills each from Ava Padwelka, Isabella Lino-Montes, and Amethyst Garcia.

Mahwah surprised Holy Angels today with a balanced attack and solid defense in their straight set win. Amanda Quiles and Sydney Selman surged on the defensive front with 10 digs each. The Mahwah attack was driven by three kills each from Sabrina Foley, Ava La Vigna, and Sydney Selman.

Ferris improved to 10-1 today with a straight set win over Lincoln. Princess Sison hoisted 23 digs in a stellar performance by the Hudson County junior.

West Milford improved to 7-4 but had a big scare from Passaic. Passaic took the first set and it looked like they might close the Highlanders out in set 2 but West Milford charged back to take the second set 26-24, and then prevailed in the third set 25-16, to take the match.

Jola! Jola! Jola! 18 kills from Jola Olutiola as Old Tappan comes from behind to take down Ramapo in three sets. Po took set 1 but the Knights revved up for sets two and three and improved to 6-4.

IHA was a beast today taking it to Wayne Hills in straight sets. It was Brookelyn Talmadge’s night as she posted 10 kills and 3 blocks for the Blue Eagles who have been soaring all season long!

WWPS improves to 10-5 with a big win over Montgomery…

Big North rivals Wayne Valley (12-2) and Bergen Tech (9-2) locked in to a very tight match today that was decided in two sets. The Knights certainly showed they can stay with the Big North powers but Wayne Valley used their firepower on the attack and on the service line to prevail. The Indians ended up with 9 aces and 23 kills with 6 from Isabelle Borowinski, and 5 from both Emily Pogorelec and Jen Howarth.

As far as the NJP Predictor and our lock of the night picks, let’s just say the algorithm has been tight and we have had solid success. Again no winner in the lock of the night despite picking 25 games. The Predictor went 48-5 today and 21-0 thus far on the locks. The lock picks improved to 90-1.

More player interviews coming this weekend… running a bit behind on our writing projects. Sorry players!!